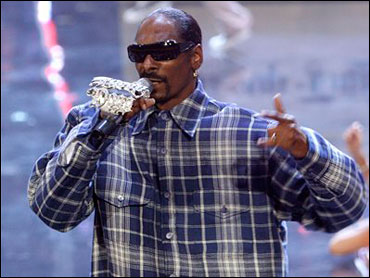 A tour bus carrying Snoop Dogg was pulled over and two people were arrested on marijuana possession charges Thursday a few hours before a concert in Dallas, a spokesman for the Texas Department of Public Safety said.

DPS spokesman Charlie Morgan said members of a commercial vehicle inspection team pulled the bus over on Interstate 45 in Corsicana - 52 miles south-southeast of Dallas - because the vehicle had an expired registration sticker. Troopers searched the bus for drugs after they said they smelled marijuana and found two ounces of the drug, he said.

Ethan Calhoun, 27, and Kevin Barkey, 26, were arrested on drug charges, Morgan told The Associated Press. Both men were taken to the Navarro County Jail and face fines of up to $2,000 and six months in jail if convicted, Morgan said. Bond was set at $1,500 each. A jailer said he did not have any information on the men Thursday night.

Snoop Dogg (real name: Calvin Broadus) was not arrested. His agent had no comment, a secretary said.

He was scheduled to appear at a concert near the Cotton Bowl in Dallas. He's on tour with alternative rock group 311.