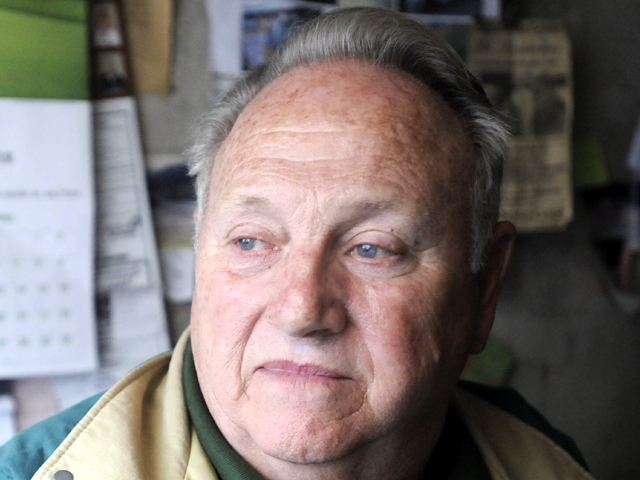 VANSANT, Va. - The owner of a salvage yard dove under a pickup truck and started praying when a sniper hiding behind a tree on a wooded hillside started firing from long range with a high-powered rifle. A shootout with sheriff's deputies followed and once the barrage of bullets finally ceased, two deputies were dead and two others critically wounded.

Roger Daniels, the owner of Roger's Service Center in rural southwest Virginia, told The Associated Press on Monday that at least 50 shots were exchanged between sheriff's deputies and the gunman. The shootout Sunday began after Buchanan County deputies went to investigate a suspected robbery Daniels' business.

Daniels said he and a deputy noticed a suspicious man hiding behind a tree.

"He was evidently in the prone position or laying down on the ground. I could see his head up every now and then," Daniels told AP.

The deputy ordered the man to come out of the woods and show his hands.

"So we started walking towards him. He raised up a little farther, he brought that rifle around there and we'd seen it. At that time we hit the ground," Daniels said.

Daniels took cover underneath a pickup truck. He couldn't see the shootout after that, but he heard the gunshots.

The injured deputies were Erik Rasnake and Shane Charles; those slain were Cameron Justus and William Stiltner.

The suspected shooter, Randy Newberry, was discovered by police some two hours after the shootout, about a quarter-mile from the salvage yard. He was standing in a front yard talking on a cell phone with his back to the officers, ignoring orders to put his hands up.

The gunman turned around, drew a pistol and officers shot him, authorities said.

A witness to that shooting, Jim Conley, said Newberry was on the phone with his wife, telling her police were about to kill him.

A woman who answered the telephone at Newberry's wife's mother's home in Vansant declined to comment.

Residents said such violence is rare in the rural area of about 1,000 people, though in January 2002, a student opened fire on the Appalachian School of Law campus in Grundy just down the road from Vansant after learning he had flunked out of school.

The school's dean, a professor and a student were killed in the attack. Three other students were wounded. The shooter, Peter Odighizuwa, pleaded guilty and was sentenced to life in prison.

"This is a laid-back community. Everybody knows everybody," said Tivis O'Quinn, 68, who has lived in Vansant for 40 years and operates a business less than a mile from the salvage yard. "Nothing like this ever takes place, except for the law school shooting."

A candlelight vigil for the four officers was planned Monday evening at the Buchanan County Courthouse in Grundy.

Vansant is a former coal mining town in the mountainous region of southwestern Virginia. O'Quinn said the community experiences "little petty thefts now and then," but nothing like what occurred Sunday.

On display in O'Quinn's office was a 2011 calendar of the Buchanan County Sheriff's Department. The photo features the department's 47 members, including Foster and 24 uniformed deputies.

Buchanan County Sheriff Ray Foster called the shooting "one of a kind" for his department but declined to say anymore.

According to the website The Officer Down Memorial Page, the last Buchanan County sheriff to die in the line of duty was in 1975 of a heart attack. The website lists four on-duty deaths for the department since 1905. The last by gunfire was in 1964.