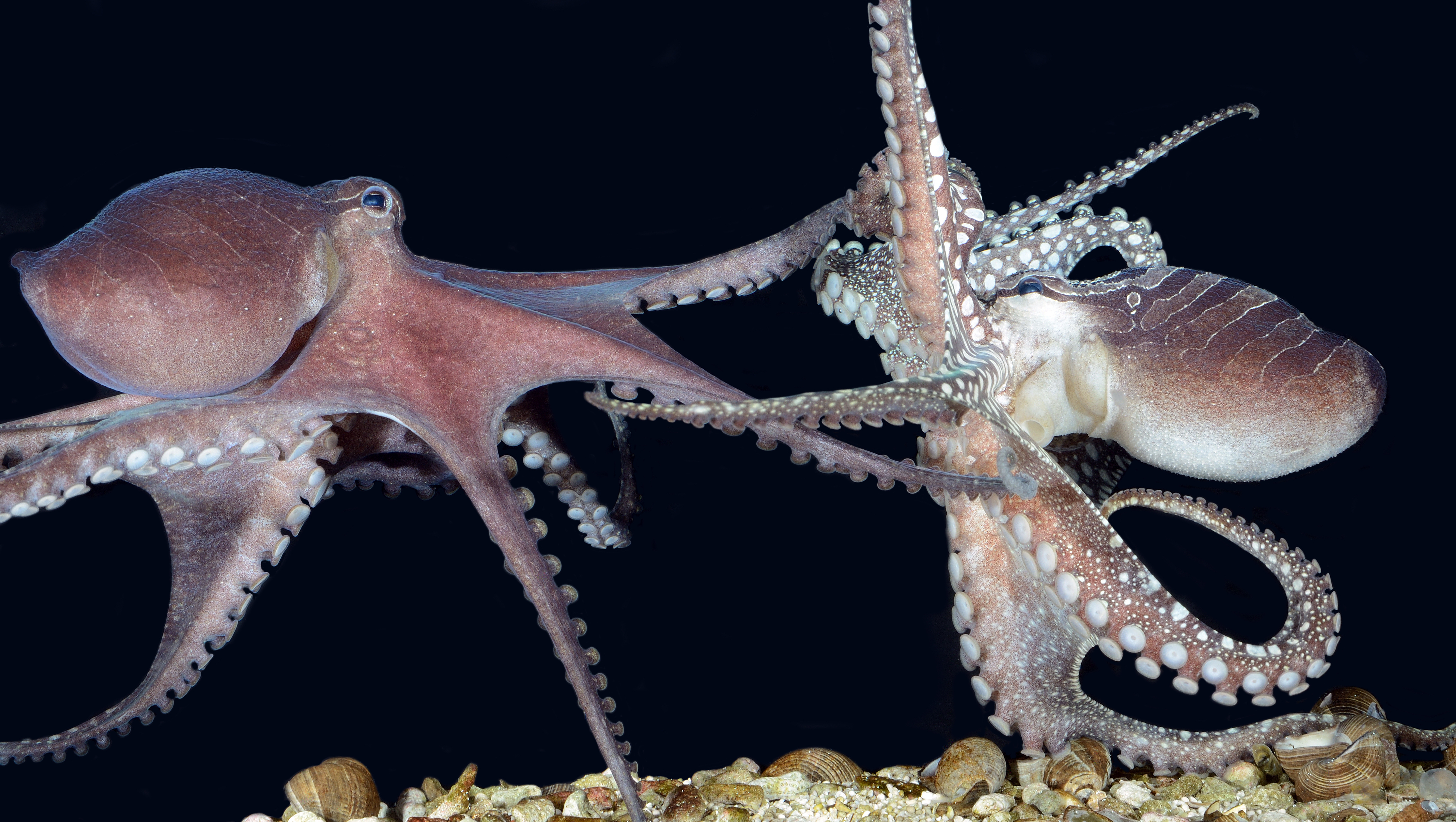 Octopuses usually keep their sexual partners at arm's length -- literally. The male uses the spoon-like end of his third right arm to insert sperm into the female's reproductive tract, then jets off. It's a quick and messy process with little physical contact.

That's why researchers at the University of California, Berkeley, were shocked to see a pair of larger Pacific striped octopus mating face-to-face -- or beak-to-beak, in cephalopod speak -- locked together, writhing in a tangle of arms and suckers.

"This is the only one we know that does that," Roy Caldwell, of UC Berkeley's department of integrated biology, told CBS News.

Caldwell has been studying octopuses for decades and had never before witnessed beak-to-beak mating. His team's findings are detailed in a study released Wednesday in the journal PLOS One.

Unlike females of other octopus species, the larger Pacific striped octopus (LPSO) mates multiple times during a six- to eight-month mating cycle, possibly having to do so while already tending to a clutch of eggs.

"She is probably going to be in her den or her shell, with her eggs behind her," Caldwell posited by way of trying to explain the strange sexual behavior. "Her defensive posture is to set in the entrance of the shell with her mouth and suckers (located at the convergence of four pairs of arms) facing outward. So if a male comes up and approaches her, he's going to have his mouth and suckers facing toward her and when they come together it'll be beak to beak, sucker to sucker."

"If I had to lay money on any hypothesis, that's what I'd back," he added.

Caldwell has also witnessed LPSO mating pairs living together in the same den and sharing food, two other behaviors never before seen in octopuses.

"My favorite observation is the predation -- the fact that this is the only octopus I know that seems to stalk its prey, kind of like a tiger moving through the grass," he said.

The LSPO pulls a move that will be familiar to any lunchroom prankster.

It will spot a shrimp, crawl toward it, then extend on long arm up and over it, tapping it on the other side. Sometimes it will be able to grab it with a sticky sucker, but more often than not the maneuver will startle the shrimp, sending it scuttling in the other direction -- and right into the octopus' arms.

"That behavior, to me, is really unusual and shows some behavioral plasticity that is well beyond what we've seen in other octopus," Caldwell said.

He underscored, however, that just because we haven't seen these behaviors before doesn't mean they're rare. There are over 300 species of octopus, with more discovered every year, and everything we know about them comes from studying fewer than a dozen different types.

"It may be that the LPSO behaviors are not unusual," said Caldwell, "or that there are other species out there that are even stranger."

Iconic salamander on brink of extinction, because of humans' appetite