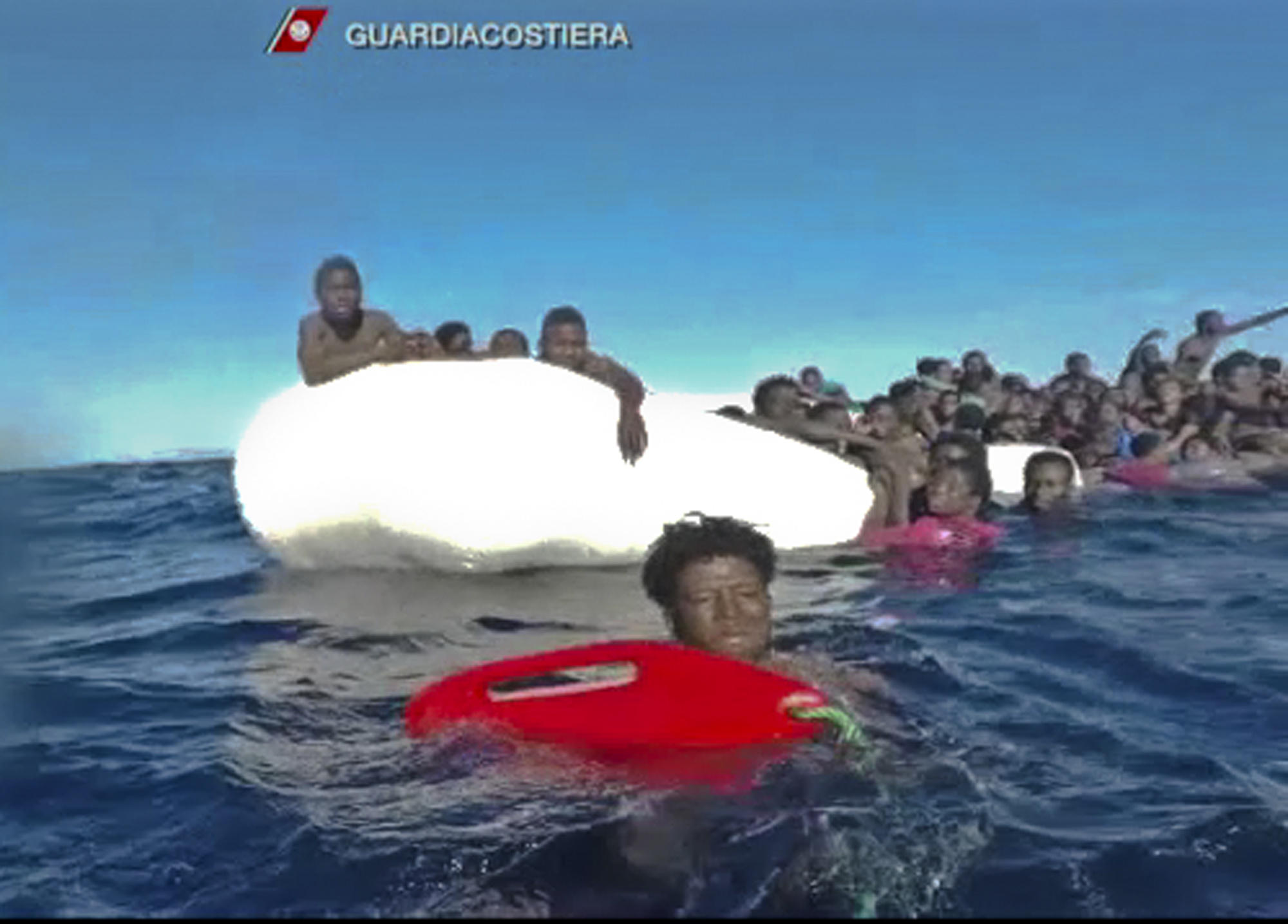 ROME -- As many as 64 African migrants, including a mother whose surviving 3-year-old child desperately clung to her as she drowned, are feared dead after a traffickers' overcrowded rubber dinghy from Libya started sinking in the Mediterranean Sea, officials said Monday.

The Italian coast guard rescued 86 people from the boat hours after it started sinking Saturday morning after it took on water and started deflating, a U.N. migration agency official said.

Specially trained rescue divers leapt into the water to pull dozens to safety, including those who managed to stay aboard the half-submerged dinghy as well as others already flailing in nearby cold waters.

Eight bodies were recovered on Saturday. Officials at the time said the corpses were all women, but U.N. migration officials who met the rescue ship when it arrived Monday in Catania, Sicily, said two of the eight dead were adult men.

Since trafficking dinghies are often crammed with far more than 100 migrants, fears quickly arose Saturday that dozens more could be missing in the sinking. An Italian coast guard search that went through the night didn't find any more survivors or corpses.

Flavio Di Giacomo of the International Organization for Migration said in tweet Monday that survivors interviewed by the agency in Catania said 150 people had been aboard the dinghy when it set out from a Libyan beach east of Tripoli.

In a telephone interview with The Associated Press, Di Giacomo said the dinghy was packed and made of poor quality rubber. Some eight hours into the Mediterranean crossing, "water started pouring in, panic ensued, the migrants all moved to one side, and the boat lost its balance and was deflating."

Some migrants managed to cling to the portion of the dinghy that wasn't submerged but many others fell into the sea, he said, adding that the Italian coast guard arrived quickly, about a half hour after being spotted by a European naval aircraft.

Catania Mayor Enzo Bianco told Italian Radio Radicale that among the survivors was a child who lost her mother.

"I watched a 3-year-old girl while she was starting to play at the port here. She was saved, grabbed at the last second by the coast guard in the sea," the mayor said. "She was clinging to her mother and she saw her drown."

Bianco said the child is now with her aunt, who was among the survivors.

All of the missing are adults, Di Giacomo said, adding that three other children survived, boys aged 2, 9 and 10.

A doctor said some of the survivors needed cardiopulmonary resuscitation when they were brought aboard the rescue ship.

"We can proudly say that many among those we resuscitated are now alive," said Dr. Maria Rita Agliozzo, who was aboard the coast guard rescue ship with a paramedic. "Unfortunately some of them did not make it."

She said the surviving children are in good condition.

"We still have to reconstruct their personal stories, because the children are shocked and didn't answer our questions. It's a step-by-step process, hopefully they will work through what happened," Agliozzo said.

Hundreds of thousands of migrants have been rescued at sea and taken to southern Italian ports in the last few years, including nearly 119,000 last year. Another 3,100 drowned along the way in 2017, the IOM says.

Di Giacomo said the Libyan coast guard in recent days rescued 250 other migrants from traffickers' boats and recovered the bodies of two women, while survivors said another 10 migrants were missing.

Those putting themselves at the mercy of smugglers and the sea include refugees fleeing wars or persecution who hope to receive asylum as well as economic migrants, mainly from sub-Saharan Africa, who aren't eligible for permission to live in Europe.