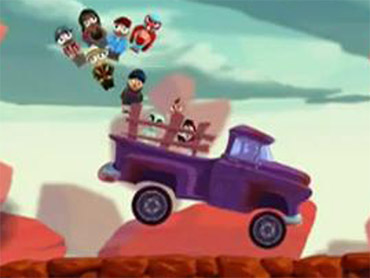 BOSTON - A game developed by a Boston-based tech company that allows users to drive a truck full of immigrants through the desert and try not to have them tossed out is drawing fire from some immigrant advocates.

"Smuggle Truck: Operation Immigration," a proposed iPhone and iPad app by Owlchemy Labs targeted for released in March, lets players navigate through what appears to be the U.S-Mexican border. As the truck drives over cliffs, mountains and dead animals, immigrants fall off the truck's bed. Scores are calculated by the number of immigrants helped crossing the U.S. border.

Developer Alex Schwartz said the idea for the satirical game came out frustration friends faced while trying to immigrate to the U.S.

"We felt like this issues was kind of a bit taboo for games and popular media," said Schwartz. "So we wanted to build something . about this struggle that we could put into our work and our passion, which is making games."

Schwartz said the message that developers what to send out through the game - it's so tough to legally emigrate to the U.S. that it's almost easier to smuggle yourself over the border despite the dangers.

But Eva Millona, executive director of the Massachusetts Immigrants & Refugee Advocacy Coalition, said the game is in poor taste and trivializes the seriousness of immigrants willing to risk their lives under a broken immigration system.

"Last year 170 human beings died crossing the border," Millona said in statement. "It's disgraceful that anyone would try to make money out of this tragedy by making light of it in a game."

"I don't think that people who are trying to emigrate into the U.S. think they are part of a game," Montes said. "They do it because they are desperate."