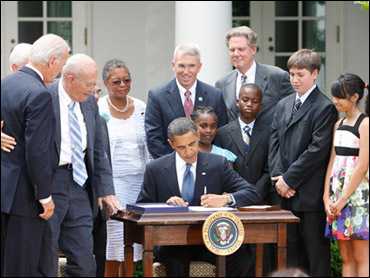 When then-Sen. Barack Obama was considering running for president, he asked his skeptical wife, Michelle, what it would take for her to support the effort. As she told "60 Minutes" in 2007, Michelle Obama insisted that her husband quit smoking as a precondition for a White House run. The senator agreed.

But nicotine, as so many Americans know, isn't easy to shake. Last June, Mr. Obama called himself a former smoker but said he sometimes slips up and sneaks a cigarette away from his family and the White House. He said he is "95 percent cured."

"Have I fallen off the wagon sometimes?" he said. "Yes. Am I a daily smoker? No. Am I a constant smoker? No."

Now comes word that the president has been advised by doctors at his first checkup since taking office to "continue smoking cessation efforts." He has been using "nicotine replacement therapy," aka nicotine gum, in his effort to kick the habit.

Watch CBS News Videos Online
The report doesn't mean that the president is necessarily still sneaking the occasional cigarette, though his apparent use of nicotine gum suggests that at the very least he is having a hard time resisting the urge to do so.

Pressed at his daily briefing Monday about the president's smoking, White House press secrtary Robert Gibbs pointed to Mr. Obama's past comment that he "occasionally falls of the wagon." Asked if the stress of the past year has made a difference, Gibbs said, "I can't imagine that that helps."

"I think he understands what he struggles with is not a good thing for his children to see or for anybody to see," said Gibbs. "I don't doubt that he would tell you he wishes once and for all he could wipe away that struggle and he works on it every day."

"He's no different than any other person -- this is a powerful addiction," Dr. Jennifer Ashton said on CBS' "They Early Show" Monday.

"Nicotine is a very powerful substance, it is highly addictive, it stimulates addictive centers in our brain, in our body, all over," she added. "…he's open about it, but he doesn't like to be teased about it, nor does anyone. The fact of the matter is, you need to stop smoking. One cigarette does damage."

The president was described in the report as in "excellent health" despite his struggles with nicotine and a slightly elevated cholesterol level. He was also urged to practice "moderation in alcohol intake," though that hasn't seemed to be a problem for the president in his time in office.

Back in 2005, the president discussed his attempt to quit smoking, saying, "The flesh is weak. It's an ongoing battle. I have my gum, my patches and all that stuff."

In October 2008, he told Men's Health, "there have been a couple of times during the campaign when I fell off the wagon and bummed one, and I had to kick it again. But I figure, seeing as I'm running for president, I need to cut myself a little slack."

Earlier in that year, he said on "Hardball With Chris Matthews" that "it is a struggle like everything else."

Here are the president's current vital statistics, per the report: Mr. Obama is 48 years old, 73 inches tall, weighing about 180 pounds while dressed, with a body mass index of 23.7 (within "normal weight" parameters).

He has a resting heart rate of 56 and a resting blood pressure of 105/62. His ears, nose, threat and eyes all pass muster, though "mild myopia, astigmatism and presbyopia were noted, but did not warrant correction."