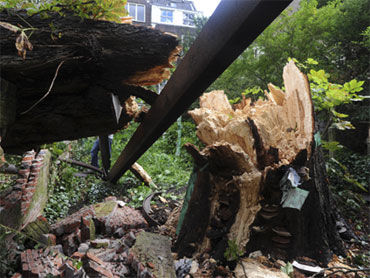 A shoot growing from the splintered trunk of a chestnut that cheered Anne Frank during her time in hiding could give the tree a new lease of life after a storm toppled it, a spokeswoman for a group that campaigned to save the tree said Tuesday.

A storm that buffeted Amsterdam on Monday snapped the towering chestnut and sent it crashing to the ground in a garden behind Anne's secret wartime hideaway.

Helga Fassbinder of the Support Anne Frank Tree foundation said the remains of the trunk will be left in the ground so that a shoot growing out of healthy wood on one side can grow.

She said using an existing shoot on the trunk should provide a swift replacement for the chestnut.

"It grows faster than normal because it benefits from the enormous root system," she said. The owner of the private garden where the tree stood agrees with the plan.

Fassbinder said large chunks of wood from the tree, estimated to weigh 60,000 pounds, will be lifted out of the garden by crane and saved. Smaller branches and leaves will be chipped.

A global campaign to save the chestnut, widely known as the Anne Frank Tree, was launched in 2007 after city officials deemed it a safety hazard and ordered it felled. The tree was granted a last-minute reprieve after a battle in court.

The 150-year-old tree suffered from fungus and moths that had caused more than half its trunk to rot.

In a bid to prolong its life, municipal workers buttressed the tree's trunk in a steel cage two years ago, but it was not enough to save it from a strong gust in Monday's storm.

Many clones of the tree had already been grown, including 11 planted at sites around the U.S. and dozens more around Europe, including 150 at a single park in Amsterdam.

The Jewish teenager made several references to the tree in the diary that she kept during the 25 months she remained indoors until her family was arrested in August 1944. She died of typhus in the Bergen-Belsen concentration camp in March 1945.