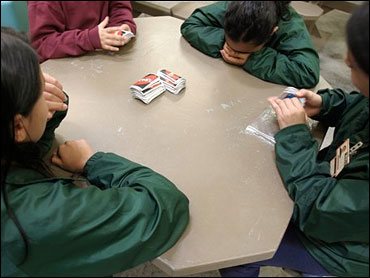 Immigrant families, many with small children, are allegedly being kept in jail-like conditions in Texas and Pennsylvania, according to advocacy groups who say the Texas facility is inhumane and should be shut down.

In a report being released Thursday, the groups seek the immediate closing of the T. Don Hutto Residential Center, about 30 miles northeast of Austin. The center, which opened in May, used to be a jail and is operated by Corrections Corporation of America, the nation's largest owner and operator of for-profit prisons and other detention facilities – so many that CCA is in its own right the fifth largest operator of prisons in the U.S., following the federal government and three states.

The groups issuing the report - Lutheran Immigration and Refugee Services and the Women's Commission for Refugee Women and Children – say their findings are based on their members' visits and interviews with detainees, many of whom cried as they told their stories.

At the Hutto site, according to the report, a child secretly passed a visitor a note that read: "Help us and ask us questions."

"What hits you the hardest in there is that it's a prison. In Hutto, it's a prison," said Michelle BranDe, detention and asylum project director for Women's Commission for Refugee Women and Children.

The report says Berks, compared to Hutto, is "less jail-like," with a better education system for children and field trips for families. But it also has problems, the groups said. It is part of a larger juvenile facility housing U.S. citizens charged with or convicted of crimes and detained juveniles.

The groups are suggesting that families who are not found to be a security risk should be released. They also recommend less punitive alternatives to the detention centers, such as parole, electronic bracelets and shelters run by nonprofit groups.

"Unless there's some crime or some danger, families don't belong in detention," said Ralston H. Deffenbaugh, president of the Lutheran Immigration and Refugee Service. "This whole idea of trying to throw kids and their parents in a penal-like situation is destructive of all the normal family relationships we take for granted."

The Homeland Security Department defends the centers as a workable solution to the problem of illegal immigrants being released, only to disappear while awaiting hearings. Also, they deter smugglers who endanger children, said Mark Raimondi, spokesman for Immigration and Customs Enforcement, the DHS division that oversees detention facilities.

White House press secretary Tony Snow said last week that finding facilities for families is difficult, and "you have to do the best with what you've got."

Other findings by the groups: