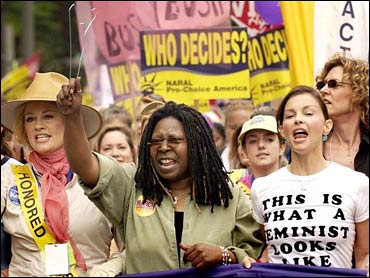 The Slim-Fast diet drink company has dumped Whoopi Goldberg from its advertising because its executives are unhappy with remarks the entertainer made last week at a Radio City, New York, fundraiser that mocked President Bush.

"We are disappointed by the manner in which Ms. Goldberg chose to express herself and sincerely regret that her recent remarks offended some of our consumers. Ads featuring Ms. Goldberg will no longer be on the air," said Terry Olson, general manager of the Florida-based diet giant.

Goldberg, who has been the star attraction at numerous Democratic fundraisers dating back to the Clinton administration, was one of many celebrities on hand at a July 8th rally for Democratic presidential candidate Sen. John Kerry and running mate Sen. John Edwards.

The VIP event - which raised $7.5 million for Kerry and the Democratic party - was private, with no media coverage allowed but it was only a matter of hours before some of over five thousand who were there started talking about what went on onstage.

Goldberg, who at one point used the Bush family name as a sexual reference, took the bulk of the heat from the GOP and other critics the next day.

But she was far from alone in frankly attacking the president.

Chevy Chase called President Bush "as bright as an egg timer" and drew laughs and cheers with his riff on politicians and their hobbies: "Clinton plays the sax, John plays the guitar, and the president's a liar." John Mellencamp sang "Let me tell you a story about the Texas Bandito," a tune that referred to President Bush as a "cheap thug."

Paul Newman called the Bush tax cuts "borderline criminal." Jessica Lange asked the crowd, "Are we going to continue to follow a self-serving regime of deceit, hypocrisy and belligerence?" And Latino actor and comedian John Leguizamo quipped: "Latins for Republicans. It's like roaches for Raid."

Bush-Cheney campaign manager Ken Mehlman made the most of the flap the next day, ridiculing the Democrats' description of the celebrities as "the heart and soul of America," suggesting the event proves Kerry is at odds with the values of many Americans, and demanding that video of the event be made public.

Neither Kerry nor Edwards commented at the time, but Kerry campaign manager Mary Beth Cahill was quick to say that the GOP doesn't release video of its private fundraisers and neither will the Democrats.

The views expressed by the performers, said Cahill, are their own views. "The performers have a perfect right to say what they said, but it is not what Senator Kerry and Senator Edwards would say, and they do not approve of some of the remarks made."

Several Bush supporters have insisted that Kerry should have condemned the remarks on the spot.

Sen. Zell Miller, the only Democratic senator to endorse President Bush for re-election, says instead of rebuking Goldberg and the others, Kerry just sat there "grinning like a mule eating briars."

Republicans' loud objections to Democrats ridiculing the president apparently should not be construed to mean that they object to name-calling.

On the campaign trail Wednesday, comedian Dennis Miller was on hand in Green Bay, Wisconsin, to warm up the crowd before an appearance by President Bush.

Miller, who like Goldberg is well-known for both strong opinions and verbally coloring outside the lines, slammed Kerry as a serial position-changer. If the senator's "core beliefs vacillate any more," said Miller, "he's going to have to get an OnStar button installed in the middle of his forehead."

Miller then lit into other prominent Democrats, calling 46-year veteran Senator Robert Byrd "off his gourd" and zinging "My Life" author Bill Clinton by saying getting the former president to write an honest book "is like asking Britney Spears to sing a cappella."