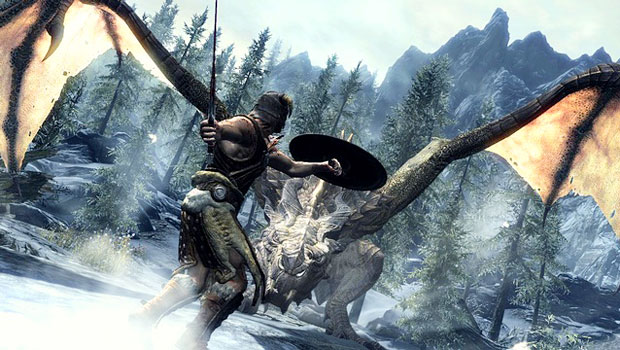 (CBS) - Bethesda's Elder Scrolls series has always been known for presenting experiences that absolutely demand your full and undivided attention.

Anyone who has played any of the previous installments can attest to how absolutely detrimental they can be to a person's social life.

Skyrim delivers this immersive and addicting gameplay in spades with a wonderful new land to explore packed with curious tales, plenty of loot and literally infinite quests.

For many, the sheer size and scope of the Elder Scrolls series can seem a bit intimidating. They're well known for giving players only the briefest of tutorials then dropping them in the middle of an expansive landscape with nearly endless possibilities - and that's the point.

The Elder Scrolls is first and foremost about forging your own adventure. After creating your very customizable character from one of the series' signature races, you are free to play the game as you choose.

Skyrim manages to grant you even more freedom and flexibility than previous titles right from the get-go. Character creation no longer involves choosing a class or assigning major and minor skills. Instead, races differ primarily by their unique aesthetics and daily power. This allows you to organically create your own character class as you play, mixing and matching abilities from the warrior, thief and mage classes as you desire.

This fits right in with Bethesda's effort to make Skyrim more accessible to a wider audience of gamers than its predecessors. Nearly every aspect of the game - be it your quest log, alchemy and enchanting, inventory and magic or leveling up - has been streamlined. Don't worry, they haven't pulled a Mass Effect 2 here and just ripped out your inventory system. The changes they have made only make the interface less cumbersome and easier to understand without sacrificing any RPG integrity.

Once you have a feel for the game, go ahead and jump right in to the main quest, or take your time getting to know all of the land's inhabitants helping them with their many side quests or become a contributing member of society and learn one of the available trades - be it blacksmithing, alchemy or cooking. Or - if you're one of those kinds of people - have at it pillaging and laying siege to every settlement you come across earning the fear and hatred of all of Skyrim's poor unfortunates.

Should you choose to eventually get around to the main plot, you'll find a deeply more fulfilling experience than was delivered in Oblivion. Not only is your character given more reason to join the adventure than simply the king's say-so, there's more to the twisting narrative than stopping a straight forward invasion.

Skyrim's dragons also serve as more than a simple plot device or gimmick - they dramatically change the feel and pace of Skyrim compared to past Elder Scrolls titles. While some dragon attacks are scripted, most are encountered randomly as you venture from settlement to settlement. They serve as mini boss battles that also remind you of the state of the world. They'll lay waste to villages as the guards and bandits alike fight along your side to defeat this greater threat to everyone's survival.

However you choose to play, you'll spend the majority of your time exploring all of the vast plains, mountain tops and dungeons that Skyrim has to offer. Bethesda's retooled graphics engine really lets them put an amazing amount of detail into these environments that lends to the overall experience.

The game doesn't just look well rendered - it's artistically beautiful. Just as the many side quests will pull your attention from that little task of saving the world, you won't be able to help but stop and marvel at the wisps of snow gently floating off the mountainside, the enchanting aurora borealis or the sight of a dragon majestically soaring before an amber sunset. Skyrim's sublime music and lush environments aim to arrest your senses.

Of course, as fans of the series have come to expect, a game of this magnitude doesn't come without cost. Between floating mammoths, occasional jittery frame rates, characters falling through ground that has failed to load properly and the inevitable yet uncommon complete crash - catching all of the game's bugs is a quest in and of itself, perhaps deserving of its very own achievement to boot. Yet considering the amount of content to experience and explore, even these typically game-killing glitches are sufferable.

Combat has also seen its share of retooling and tweaking. The addition of dual wielding has changed spell casting into an aggressive and visceral experience, making it the most fun its been so far in the series.

Small changes to the flow of melee combat have made brandishing your favorite blunt or bladed weapons more strategic and less of a frantic slap-fest. The inclusion of Fallout-style slow motion finishing moves and assassinations add some much needed flair to enemy encounters, it's just a shame that these visual treats don't extend to archery or spell casting.

The game also suffers from disappointingly little character development. Over the course of what can be hundreds of hours of adventuring, there's very minimal camaraderie to be found amongst the main characters, companions, mages, thieves or assassins that you befriend. Even your spouse, should you choose to get married, is little more than a stranger in your home. This is only disappointing when considering the leap forward Fallout: New Vegas took in letting you create your own little band of brothers each with their own motivations and quests.

That's not to say that Skyrim's inhabitants aren't interesting. In fact, not only is each character imbued with his or her own personality but they each seem to be caught up in some mess that requires you to steal, swindle, bribe or murder on their behalf. Every quest and every character invariably takes an unexpected twist that keeps you on your toes.

To be fair, the most important character you'll fall in love with is the one Bethesda nailed - Skyrim itself. The world is as alive and engrossing as any novel or film. It's not a game you play - it's a role you inhabit. The true charm of the Elder Scrolls series lies in its enchanting lore and secrets waiting to be discovered. It's the reason so many sleepless nights are so willingly given.

The Elder Scrolls V: Skyrim is available now for Xbox 360, PlayStation 3 and PC. It is rated M for Mature by the ESRB.