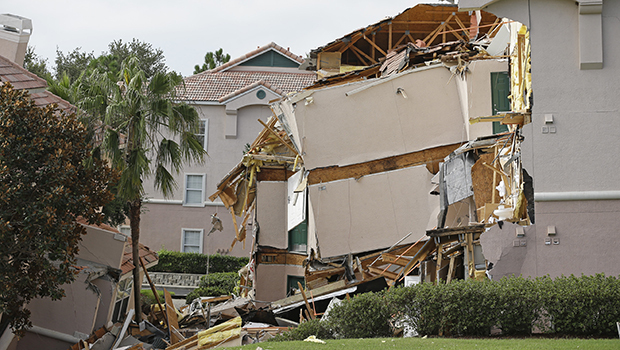 CLERMONT, Fla. It sounded like a thunderstorm as windows broke and the ground shook, but vacations who were awakened from their rooms at a villa near Orlando soon realized that the building was starting to collapse — parts of it swallowed by a 100-foot sinkhole that also endangered two neighboring resort buildings.

By early Monday, nearly a third of the structure at Summer Bay Resort had collapsed. All 105 guests staying in the villa were evacuated, as were those in the neighboring buildings. No injuries were reported.

The villa, with 24 three-story units, was reported as a total loss, and inspectors remained on the scene Monday afternoon to determine whether the other two buildings near the sinkhole — a common occurrence in Florida — would be safe to re-enter.

The first sign of trouble came about 10:30 Sunday night. Security guard Richard Shanley had just started his shift, and he heard what sounded like shouting from a building.

A guest flagged him down to report that a window had blown out. Shanley reported it to management, and another window popped. The resort's staff decided to evacuate the villa.

Shanley said the building seemed to sink by 10 to 20 inches and bannisters began to fall off the building as he ran up and down three floors trying to wake guests.

One couple with a baby on the third floor couldn't get their door open and had to break a window to get out, he said.

"It's a scary situation," Shanley said, and guests credited him with saving lives by knocking on doors to wake them. Inside, they heard what sounded like thunder and then the storm of water, as if it were a storm. Evacuation took about 10 to 15 minutes, according to staff and witnesses.

Amy Jedele heard screams coming from one of adjacent buildings around 10:30 p.m., and several minutes later the sounds of sirens. She and her fiance, Darren Gade, went outside. "That's when you could hear the pops and the metal, the concrete and the glass breaking," she said.

The first portions of the building to sink were the walkways and the elevator shaft, Gade said.

Then, as part of the leaning building crumbled quickly into the ground, dust shot up around the site.

In one of the adjacent buildings, firefighters and police officers knocking on doors woke up Maggie Moreno of San Antonio. She couldn't get the door to her unit open all the way.

"It sounded like popcorn," said Moreno, who was visiting with her husband, daughter and two grandchildren. "The building was just snapping."

Luis Perez also was staying at a nearby building. He said was in his room when the lights went off around 11:30 p.m. He said he was on his way to the front desk to report it when he saw firefighters and police outside.

Over the next five hours, sections of the building sank into the ground. Paul Caldwell, the development's president, said the resort gave all affected guests other rooms.

Some visitors — many of whom had to leave their wallets, purses and other belongings behind in the quick evacuation — were given cash advances by Summer Bay.

There were no signs before Sunday that a sinkhole was developing, Caldwell said. He said the resort underwent geological testing when it was built about 15 years ago, showing the ground to be stable.

Caldwell said he was waiting on further inspections to determine any damage to the second and third buildings.

The resort — with condominiums, two-bedroom villas and vacation houses in addition to standard rooms — has about 900 units spread over a large area about 10 miles west of Walt Disney World. It is set on a secluded 64-acre lake.

Problems with sinkholes are ongoing in Florida. They cause millions of dollars in damage in the state annually.

On March 1, a sinkhole underneath a house in Seffner, about 60 miles southwest of the Summer Bay Resort, swallowed a man who was in his bed. His body was never recovered.

But such fatalities and injuries are rare, and most sinkholes are small. They are caused by Florida's geology — the state sits on limestone, a porous rock that easily dissolves in water, with a layer of clay on top. The clay is thicker in some locations making them even more prone to sinkholes.

Other states sit atop limestone in a similar way, but Florida has additional factors like extreme weather, development, aquifer pumping and construction.