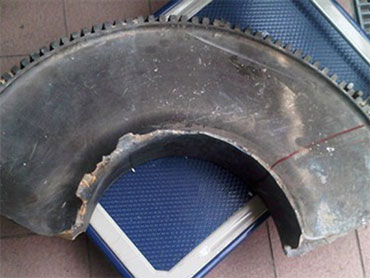 Singapore Airlines grounded three of its A380 superjumbo jets on Wednesday after tests uncovered problems with the planes' Rolls-Royce engines - a move that comes less than a week after an engine on a Qantas A380 exploded shortly after take-off.

Tests revealed oil stains in three engines on three of the airline's A380s, Singapore Airlines said in a statement. The planes, in Melbourne, Sydney and London, will be fitted with new engines, the airline said.

Last week, Qantas grounded its fleet of A380s - the world's newest and largest airliner - after one of the aircraft's Rolls-Royce engines burst during a flight from Singapore to Sydney. The explosion showered debris over Indonesia's Batam island. The plane made a safe emergency landing in Singapore.

London-based Rolls-Royce, which manufactures engines for A380s by Qantas, Singapore Airlines and Germany's Lufthansa, had recommended a series of checks on the Trent 900 engines.

Australia's national carrier grounded its six double-decker A380s after an engine burst minutes into a flight from Singapore to Sydney last week.

CEO Alan Joyce said Monday that engineers have discovered oil leaks in the turbine area of three engines on three different A380s. He says: "that shouldn't be occurring."

He says all of the airline's A380s will be grounded at least 72 more hours.

Engineers conducted eight hours of extensive checks on each engine over the weekend.

"On three of the engines what we found are slight anomalies, oil where oil shouldn't be," Qantas CEO Alan Joyce told the Australian Broadcasting Corp. "We're trying to check what the cause of that could be. These are new engines on new aircraft and they shouldn't have these issues at this stage, so it's given us an indication of an area for us to focus on."

Joyce said the A380s will not fly until testing is complete and the airline is certain that the planes can fly safely, though that is expected to take days rather than weeks.

"Our top priority is making sure we have the continued safe operation of the aircraft," Joyce said. "If this takes a bit longer, we'll take longer."

The Qantas engineers are working with Rolls-Royce, who manufactured and maintains the engines, as well as Airbus.

Joyce said it still was not clear what caused the engine failure on flight QF32 last Thursday but believed it was not a maintenance issue.

"It could be a series of things. We think it could have could have been a materials issue or a design issue," he said.

Investigators have focused their search on a missing piece of turbine from the Rolls-Royce engine.

The Australian Transport Safety Bureau, which is leading an international investigation into the blowout on the A380, appealed for help from residents of Indonesia's Batam island to find the missing chunk of a turbine disc.

The island was scattered with debris last Thursday when one of the A380's four Trent 900 engines failed minutes into a flight to Sydney, with 466 people aboard. The engine was quickly shut down and the plane returned to Singapore and safely made an emergency landing.

"The recovery of that disk could be crucial to a full understanding of the nature of the engine failure, and may have implications for the prevention of future similar occurrences," the bureau said in a statement.

It released a photograph of a jagged and bent piece of turbine disc from the Trent 900 engine and asked that anyone who might have found a similar piece should hand it to police.

It said one piece of the shattered engine that had been found on Batam was being sent to Britain for examination by Rolls-Royce engineers, under the supervision of bureau investigators. Extra experts were being sent from Australia to Singapore to examine other debris.

Rolls-Royce Group PLC, a London-based aerospace, power systems and defense company separate from the car manufacturer, has said the investigation is in its early stages and that it is too early to draw any conclusions.

John Goglia, a former National Transportation Safety Board member and an expert on aircraft maintenance, said the photo showing the broken turbine disc indicates it was the disc that may have failed. The photo didn't show any signs of discoloration on the disc that would indicate overheating.

There are several reasons why a disc might fail, but they usually involve the metal used to make the disc or the manufacturing method, Goglia said. He cautioned that he was looking at one photo, which was not enough information to make a definitive judgment.