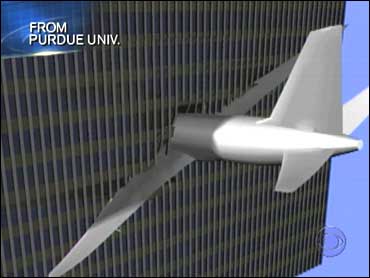 A computer simulation of the 2001 World Trade Center attacks supports a federal agency's findings that the initial impact from the hijacked airplanes stripped away crucial fireproofing material and that the weakened towers collapsed under their own weight.

The two-year Purdue University study, funded in part by the National Science Foundation, was the first to use 3-D animation to provide visual context to the attacks, said Christoph Hoffmann, a professor of computer science and one of the lead researchers on the project.

"One thing it does point out ... is the absolute essential nature of fireproofing steel structures," Hoffmann told The Associated Press. "This is something that wasn't done originally in the World Trade Center when it was built. It wasn't code at that time."

Researchers hope their findings will lead to improvements in strengthening new buildings, reports CBS News correspondent Bob Orr, including the "Freedom Tower" which will rise from the hallowed spot in Lower Manhattan.

"In the unfortunate development that we shall have to design structures to survive such events, the methods we have developed and will be developing will be of great use to designers," said Mete Sozen, a professor of structural engineering and a lead investigator on the simulation.

The animation, intended in part to help engineers design safer buildings, begins with a map of lower Manhattan as it appeared on Sept. 11, 2001. The video then shows a plane slicing through several stories of the World Trade Center's north tower and follows the disintegrating plane through the interior and out the opposite side.

The report concludes that the weight of the aircraft's fuel, when ignited, produced "a flash flood of flaming liquid" that knocked out a number of structural columns within the building and removed the fireproofing insulation from other support structures, Hoffmann said.

The simulation also found that the airplane's metal skin peeled away shortly after impact and shows how the titanium jet engine shafts flew through the building like bullets.

Ayhan Irfanoglu, a Purdue professor of civil engineering, said half of the building's weight-bearing columns were concentrated at the cores of the towers.

"When that part is wiped out, the structure comes down," Irfanoglu said. "We design structures with some extra capacity to cover some uncertainties, but we never anticipate such heavy demand coming from an aircraft impact. If the columns were distributed, maybe, the fire could not take them out so easily."

A 2005 report following a three-year investigation by the National Institute of Standards and Technology, a federal engineering agency, recommended that cities raise fire standards for skyscrapers and develop new materials that can better protect tall buildings from fire. That analysis did not blame the collapse on the steel or design of the towers, but instead focused on the damage to the fireproofing.

Shyam Sunder, the lead NIST investigator, said he was aware of the Purdue study and called it and his own agency's study "among probably the most prominent analyses that have been conducted in the United States."

The animation is the latest project by the Purdue team to assess the structural damage from the Sept. 11 attacks. The team also studied the impact of the crash into the Pentagon.