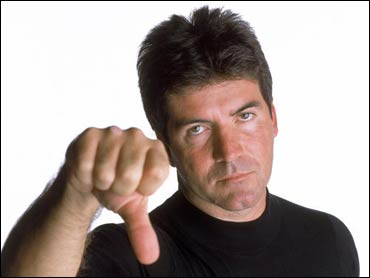 It's not usual for Simon Cowell to take a drubbing in the U.K. pop charts.

But according to published reports, a Facebook campaign has pushed Rage Against the Machine's "Killing in the Name" to the top of the U.K. Christmas charts, beating out "The Climb" by Joe McElderry, winner of Cowell's "The X Factor" TV show.

And anyone who has seen Bill Nighy in "Love, Actually" can tell you just how big a deal the Christmas charts are to the British.

For the past several years, the Christmas number-one song has been the winner of "The X Factor," which is like "American Idol" and features Simon Cowell.

A grass-roots campaign was started this year to make sure "X Factor" winner Joe McElderry's version of "The Climb" didn't hit the top spot this week.

The Facebook campaign chose a 17-year-old hit by Rage Against the Machine to go up against Cowell's 2009 entry. According to the BBC, Rage ended a four-year run by Cowell-backed artists by some 50,000 downloads.

Rage is calling it the "Anarchy Christmas Miracle of 2009" and have donated their earnings from the sale of the single to a homeless charity.