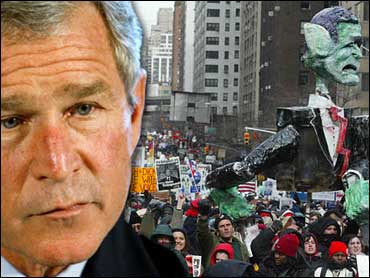 Activist Brett Bursey has made a profession out of annoying U.S. presidents for nearly 40 years, demonstrating for or against a variety of political causes.

But, as CBS News Correspondent Lee Cowan reports, while demonstrating during a presidential visit to South Carolina last year, Bursey was arrested and could now be facing up to six months in prison.

A U.S. Secret Service Agent told Bursey neither he nor his anti-war poster belonged on a public corner.

He was told he couldn't be anywhere but the free speech zone.

But that so-called "free speech zone" wasn't outside the hangar where the President Bush was speaking. It wasn't across the street. Nor was it down the street. It was a half a mile away, where he couldn't be seen by the president. That's exactly Bursey's point.

"We are minimalized to the point of being invisible," says Bursey. "The invisibility of protest is something that's new under the Bush administration."

Few would argue controlling protests is one way to control security.

At the Philadelphia convention that nominated Mr. Bush in 2000, demonstrators were fenced in for fear violence would break out -- and it did.

But an American Civil Liberties Union lawsuit charges the president's "free speech zones" are so far out of sight they don't control protests. Instead, they make them disappear.

"There's nothing more fundamentally un-American than punishing people for the content of their speech," says Chris Hansen, of the ACLU.

The suit cites more than a dozen instances all across the country where peaceful demonstrators were segregated from the rest of the public.

But anti-Bush protestors like retiree Bill Neel were ordered behind a fence, out of sight of the president and the press.

"My moment to speak out was taken away from me," says Neel.

The Secret Service declined to discuss any specific case or to comment on camera, but told CBS News: "Decisions made in the formulation of a security plan are based on security considerations, not political considerations."

But Bursey says he wasn't disrupting traffic or the event and adds that he wasn't a security risk.

For now, the ACLU is hoping a judge will grant an injunction against the protest zones before the presidential campaign gets into full swing.

Without it, some fear, those hoping to voice their displeasure with the president in person may truly be just voices in the wilderness.