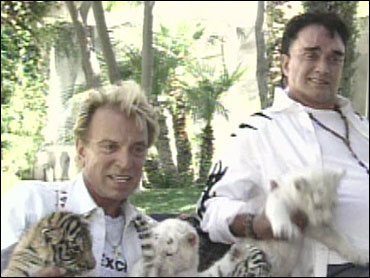 Although Siegfried & Roy no longer perform due to Roy's tragic accident five years ago, the dazzling duo and their famous white tigers are still drawing crowds in Las Vegas, but now it's to their Secret Garden and Dolphin Habitat.

With nearly 6,000 performances under their belt, they had thrilled millions before one of their beloved white tigers lunged at Roy Horn and nearly killed him. Since then, their life's work has been dedicated to protecting these fascinating animals.

Early Show veterinarian Debbye Turner Bell got an exclusive look at the new white tiger sanctuary, where the dangerous and exotic animals are on public display.

Bell was able to walk and cuddle with five 15-week-old white tiger cubs, who are direct descendents of the former star attraction white tigers. Just over 30 pounds now, the tiger cubs will soon weigh over 500 pounds.

Lynette Chappell, who has worked and performed with Siegfried & Roy for nearly 40 years, looks after the tigers at Siegfried & Roy's Secret Garden. Every year, 600,000 people come to see the beautiful cats.

In addition to entertaining and letting people get close to the tigers, the exhibit is meant to educate onlookers about the endangered species.

"Roy goes very often," Bell said. "He still has a very close connection with the animals."

Siegfried & Roy have a Vegas attraction in addition to the Secret Garden -- a Shark Reef Exhibit at the Hotel at Mandalay Bay.

It houses a Komodo dragon, which is so poisonous that trainers can't even get near it -- they use a target pole to move the giant lizard around and launch food over a barricade to feed it.

According to a trainer, a Komodo dragon doesn't waste any food. It can eat an animal that weighs about 700 pounds and leave nothing behind, not even bones.

For groups of children that come by to see the Komodo dragon and other predators in the menagerie, there are larger messages, which include awareness and respect, Bell explained.

Many may wonder what will happen to the white tiger cubs when they grow up.

"They'll stay in the collection there," Bell said. "In the hopes that Siegfried & Roy can again perform one day, but until now, they're dedicated to conservation, teaching awareness about these precious animals."