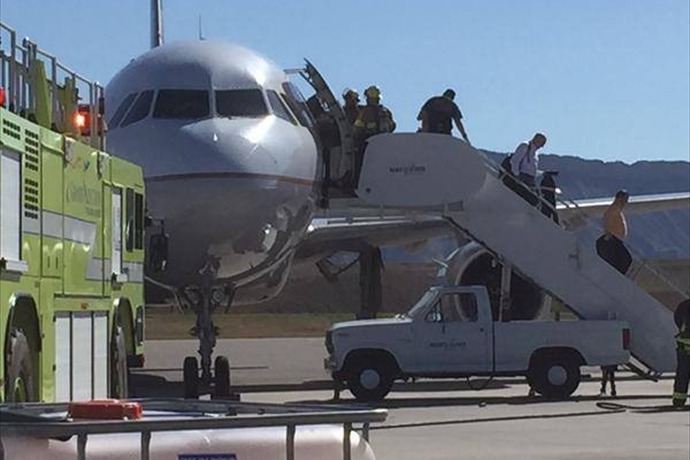 GRAND JUNCTION, Colo. -- A flight from Denver to Los Angeles was diverted to Grand Junction, Colorado, on Wednesday after a number of passengers reported feeling ill.

United Airlines spokeswoman Jennifer Dohm said the crew of the Airbus A320 deployed oxygen masks and decided to land.

There were reports of smoke in the cockpit and cabin, but Grand Junction Fire Department spokesman Shawn Montgomery said firefighters saw no smoke when they entered the plane. All of the passengers were able to walk off the plane, and one person was taken to the hospital for evaluation.

"This is the type of incident that our emergency personnel prepare and train to handle, crews arrived on scene well before the aircraft landed and made entry onto the aircraft immediately," said Amy Jordan, a Grand Junction Regional Airport spokesperson.

Jeremy Kissinger, an event coordinator on his way to Los Angeles with his friends for vacation, was sitting in row 37 of the plane when he noticed a passenger who appeared to have passed out several rows in front of him. Flight attendants began attending to the passenger.

"There was an announcement that there was a problem with the air and they were going to drop the masks," Kissinger said.

Kissinger said everything seemed normal until the oxygen masks came down, adding that he noticed several people heading to the bathrooms as soon as they were able. He did not smell anything out of the ordinary nor experience any illness. He said other people in the same general area also fell ill.

Firefighters in full gear, including air tanks, boarded the plane and tested the air before the plane was evacuated.

"You do kinda feel like you're in the middle of nowhere," Kissinger said of the Grand Junction airport. "There's a Subway (sandwich shop) and that's about it."