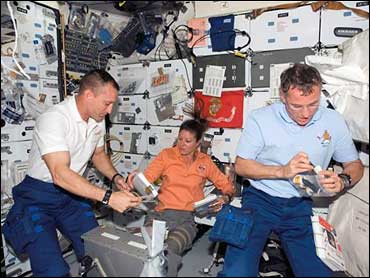 Endeavour and its crew of seven streaked toward Earth on Tuesday, wrapping up a nearly two-week orbital drama that centered on a deep gouge in the shuttle's belly and an early homecoming prompted by a hurricane.

NASA stressed that the 3.5-inch-long gouge in Endeavour's belly would not endanger the shuttle or its astronauts.

The damaged area on Endeavour faced 2,000-degree temperatures during the hottest part of atmospheric re-entry, but engineers were convinced after a week of thermal analyses and tests that the spacecraft would hold up.

There was zero chance of a catastrophe like the one that destroyed space shuttle Columbia in 2003 when hot atmospheric gases seeped into a hole in its wing, NASA managers said.

Endeavour's re-entry path had the shuttle zooming over the South Pacific, crossing Central America and Cuba, then heading up the Florida peninsula into Kennedy Space Center. Its trip spanned 13 days and 5.3 million miles.

"It doesn't come free": How to shop online without being tracked

Is the Internet listening to your private conversations?

The shuttle was not supposed to return until Wednesday, but over the weekend, mission managers decided to cut its space station visit short. At the time, NASA was uncertain whether Hurricane Dean might threaten Houston, home to Mission Control. Even though forecasters later put Houston out of harm's way, NASA held to a Tuesday landing.

On Monday, NASA cleared Endeavour for landing after engineers finished evaluating the latest laser images of the shuttle's wings and nose and concluded there were no holes or cracks from micrometeorites or space junk. The astronauts inspected the especially vulnerable areas Sunday, after undocking from the international space station.

During liftoff on Aug. 8, a piece of foam insulation or ice broke off a bracket on the external fuel tank. It fell onto a strut lower on the tank, then bounced into Endeavour and gashed it.

Brackets have shed debris in launches since Columbia, but it was not until Endeavour's flight that such debris caused noticeable damage again. The damage triggered a weeklong analysis that involved hundreds of engineers and thousands of hours of supercomputer simulations.

NASA does not plan to launch another space shuttle until the problem is solved. For now, Discovery is supposed to lift off in late October.

While in orbit, the astronauts attached a new truss segment to the space station and replaced a failed gyroscope needed for keeping the outpost headed in the right direction. They also delivered 5,000 pounds (2,300 kilograms) of supplies.

The crew completed four spacewalks, two of which were cut short. One was halted after a spacewalking astronaut noticed a cut in his glove. The other was abbreviated to give the crew enough time to prepare for an early departure from the space station.

Morgan took time to answer questions from students in Idaho, Virginia and Canada.

Endeavour's seven crew members woke early Tuesday to Simon and Garfunkel's "Homeward Bound," a tribute from all of their families.

"That's very nice of them to think of that," commander Kelly told Mission Control. "Although it's been a short two weeks, we've accomplished a lot and we still look very much forward to coming home today."