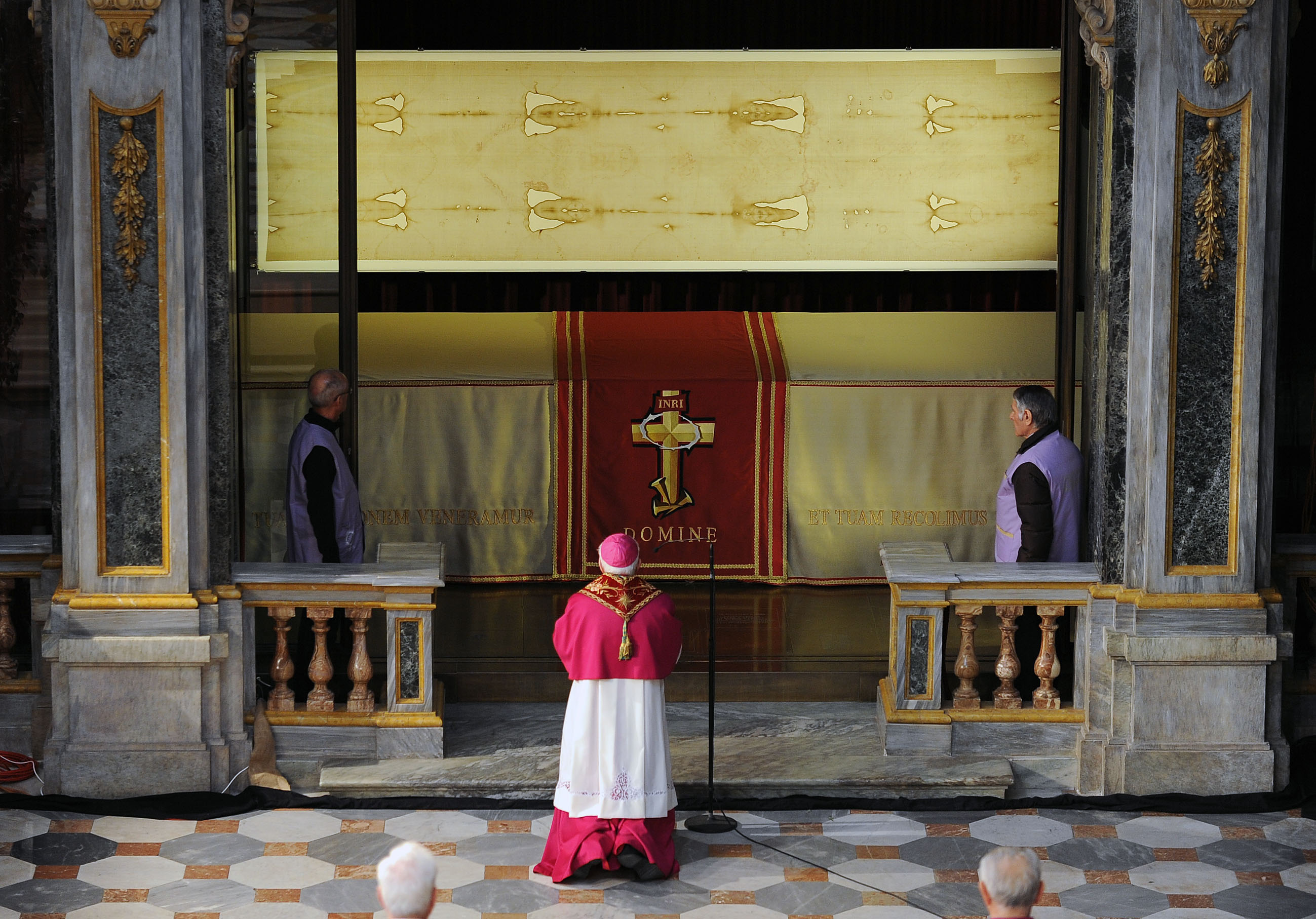 VATICAN CITY The Shroud of Turin went on display for a special TV appearance Saturday amid new research disputing claims it's a medieval fake and purporting to date the linen some say was Jesus' burial cloth to around the time of his death.

Pope Francis sent a special video message to the event in Turin's cathedral, but made no claim that the image on the shroud of a man with wounds similar to those suffered by Christ was really that of Jesus. He called the cloth an "icon," not a relic — an important distinction.

"This image, impressed upon the cloth, speaks to our heart and moves us to climb the hill of Calvary, to look upon the wood of the Cross, and to immerse ourselves in the eloquent silence of love," he said.

"This disfigured face resembles all those faces of men and women marred by a life which does not respect their dignity, by war and violence which afflict the weakest," he said. "And yet, at the same time, the face in the Shroud conveys a great peace; this tortured body expresses a sovereign majesty."

Many experts stand by carbon-dating of scraps of the cloth that date it to the 13th or 14th century. However, some have suggested the dating results might have been skewed by contamination and have called for a larger sample to be analyzed.

The Vatican has tiptoed around just what the cloth is, calling it a powerful symbol of Christ's suffering while making no claim to its authenticity.

The 14-foot-long, 3.5-foot-wide (4.3-meter-long, 1 meter-wide) cloth is kept in a bulletproof, climate-controlled case in Turin's cathedral, but is only rarely open to the public. The last time was in 2010 when more than 2 million people lined up to pray before it and then-Pope Benedict XVI visited.

The latest display coincided with Holy Saturday, when Catholics mark the period between Christ's crucifixion on Good Friday and his resurrection on Easter Sunday. A few hundred people, many in wheelchairs, were invited inside the cathedral for the service, which was presided over by Turin's archbishop. It was only the second time the shroud has gone on display specifically for a TV audience; the first was in 1973 at the request of Pope Paul VI, the Vatican said.

The display also coincided with the release of a book based on new scientific tests on the shroud that researchers say date the cloth to the 1st century.

The research in "The Mystery of the Shroud," by Giulio Fanti of the University of Padua and journalist Saverio Gaeta, is based on chemical and mechanical tests on fibers of material extracted for the carbon-dating research. An article with the findings is expected to be submitted for peer-review, news reports say.