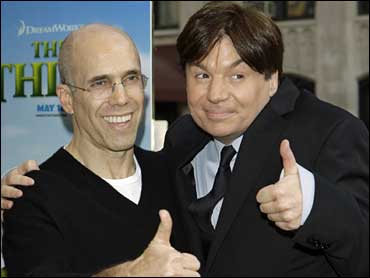 It was a green carpet fit for a king. Everyone's favorite ogre — who takes a trip to the royal throne in "Shrek the Third" — took a walk down the green carpet Monday night.

Stars of the film including the ogre himself, Mike Myers, came out for a special screening of the movie in New York City's Clearview Chelsea West Theatre. The film's premiere took place in Los Angeles.

When Shrek married Fiona, the last thing he had in mind was becoming the next King. But when Shrek's father-in-law, King Harold, suddenly croaks, that is exactly what he faces.

Unless Shrek (with the help of his trusted companions Donkey and Puss In Boots) can find a suitable King for Far Far Away, the ogre could be stuck with the job. The most promising candidate, Fiona's cousin Artie, an underachieving Medieval high school slacker, proves to be more of a challenge than they bargained for.

Fans of the highly-anticipated "Shrek the Third" don't have to wait much longer. The movie opens nationwide May 18, 2007.
By Michele Jarchin