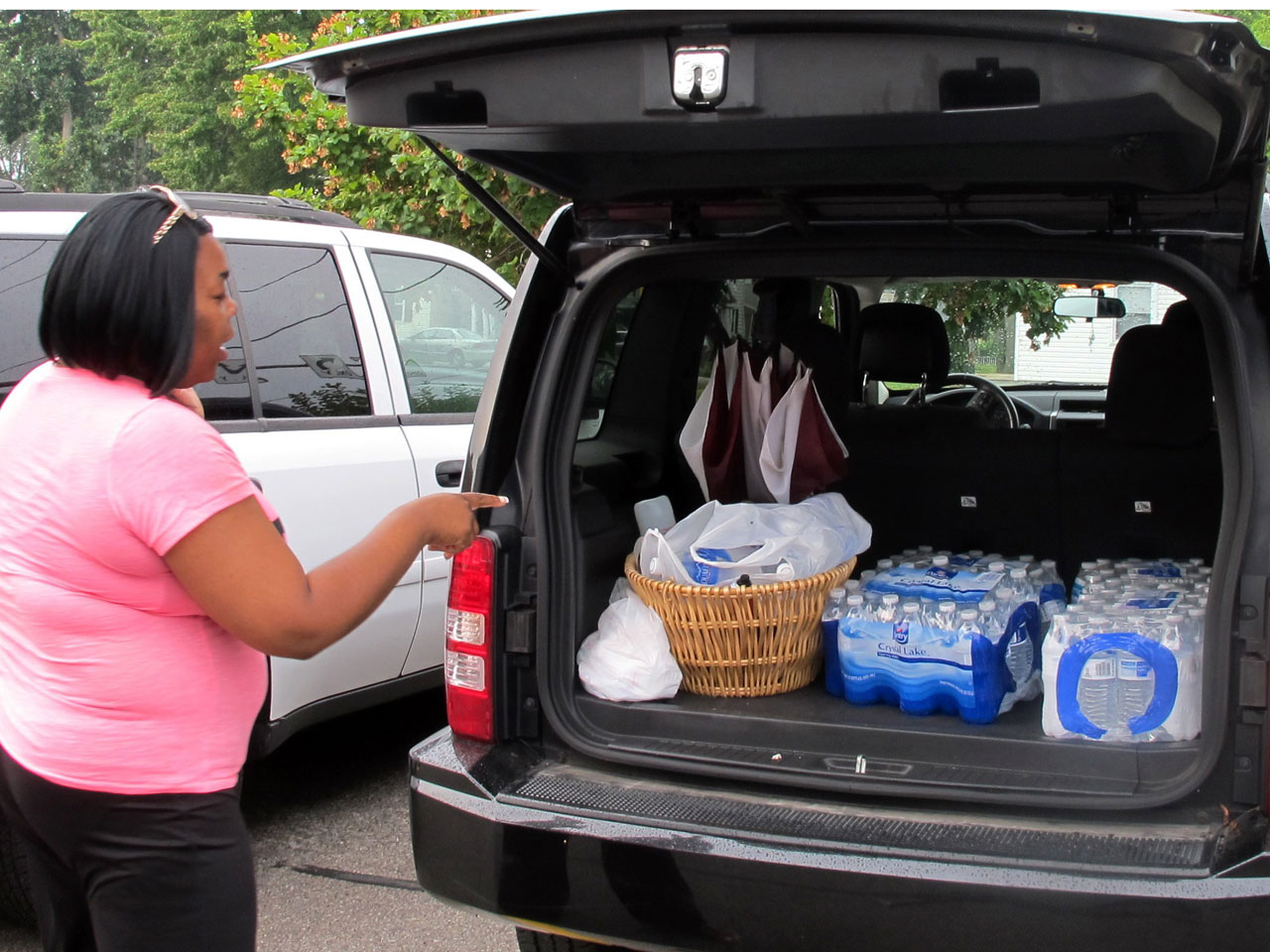 TOLEDO, Ohio - Residents of Ohio's fourth largest city are now being warned about potential hazards from taking a shower.

The Toledo-Lucas County Health Department said late Saturday that, at the urging of the Centers for Disease Control, it is advising that those with liver disease should avoid showering. This applies only to those who get their water service from the city of Toledo's water treatment plant.

The department now also says that those with sensitive skin may want to avoid showering because the water could cause irritation, reports CBS affiliate WTOL in Toledo.

The health department had originally advised it was safe for affected residents to bathe.

More tests are needed to ensure that toxins are out of Toledo's water supply, the mayor said Sunday, instructing the people in the region to avoid drinking tap water for a second day.

"This is not over yet," Mayor D. Michael Collins said, adding that new samples showing decreased levels of toxins in the water are a positive sign.

Long lines formed at water distribution centers and store shelves were quickly emptied of bottled water after Toledo officials told residents not to drink from its water supply that was fouled by toxins possibly from algae on Lake Erie.

The warning effectively cut off the water supply to 400,000 people in Toledo, most of its suburbs and a few areas in southeastern Michigan.

Worried residents told not to drink, brush their teeth or wash dishes with the water emptied store shelves and waited hours for deliveries of bottled water from across Ohio as the governor declared a state of emergency.

Gov. John Kasich pledged that state agencies were working to bring water and other supplies to areas around Toledo while also assisting hospitals and other businesses impacted. The state also was making plans to make more deliveries if the water problem lingered, he said.

"What's more important than water? Water's about life," Kasich said. "We know it's difficult. We know it's frustrating."

The situation in Toledo has also prompted officials in Chicago to re-test the water being pumped in there from Lake Michigan, reports the Chicago Tribune.

The governor said it was too early to say how long the water advisory will last or what caused toxins to spike suddenly in the drinking water.

"We don't really want to speculate on this," Kasich told The Associated Press. "When it comes to this water, we've got be very careful."

Samples of water were flown to the federal and state Environmental Protection Agency offices in Cincinnati and Columbus and a university in Michigan for additional testing, officials said.

Residents waking up to the warning on Saturday morning lined up outside just about any store selling water. Some were mothers concerned about how they would make formula for their infants and other were worried about their elderly parents.

"It looked like Black Friday," said Aundrea Simmons, who stood in a line of about 50 people at a pharmacy before buying four cases of water.

Families toting empty coolers, milk jugs and even cookie jars topped them off with well water funneled out of the back of a pickup truck.

John Myers, a farmer from nearby Swanton, loaded 450 gallons of well water into a container in the back of his pickup truck and gave it out for free in a high school parking lot.

"The more you got, the more we'll fill," he told residents carrying empty containers. "I never thought I'd see the day that I'd be giving water away."

Myers said his concern was that the advisory could go on for days. "This is a lot more serious than anybody's thinking about," he said.

Tyshanta DeLoney, of Toledo, filled up a big plastic container after spending much of the day searching for water. "That was a blessing," she said.

Toledo issued the warning just after midnight Saturday after tests at one treatment plant showed two sample readings for microsystin above the standard for consumption. The city also said not to boil the water because that would only increase the toxin's concentration. The mayor also warned that children should not shower or bathe in the water and that it shouldn't be given to pets.

Water coming from the lake into Toledo's water plant had relatively low toxicity levels this summer compared with a year ago until this sudden spike.

Algae blooms during the summer have become more frequent and troublesome around the western end of Lake Erie, the shallowest of the five Great Lakes.

The algae growth is fed by phosphorus mainly from farm fertilizer runoff and sewage treatment plants, leaving behind toxins that have contributed to oxygen-deprived dead zones where fish can't survive. The toxins can kill animals and sicken humans.

Scientists had predicted a significant bloom of the blue-green algae this year, but they didn't expect it to peak until early September.

The state began delivering water to the Toledo area Saturday afternoon. Containers were being filled with water at a prison near Columbus and trucked about 130 miles north, said Nancy Dragani, director of the Ohio Emergency Management Agency.

The state also asked major grocery chains to divert as much water as they can to northwest Ohio, she said. The Ohio National Guard planned to send units that can turn pond water into drinkable water to three hospitals and a state prison in Toledo.

As truckloads of water came in from across the state, Toledo leaders set up distribution centers at schools around the city, limiting families to one case of bottled water. Some stores were receiving new shipments of water and putting limits on how much people can buy.

"We're going to be prepared to make sure people are not without water," said Toledo Mayor D. Michael Collins.

There were no reports yet of people becoming sick from drinking the water, Collins said.

Stores in cities up to 50 miles away were reporting shortages of bottled water. Some neighboring communities that aren't connected to Toledo's water system were offering their water to people who brought their own bottles and containers.

Operators of water plants all along Lake Erie, which supplies drinking water for 11 million people, have been concerned over the last few years about toxins fouling their supplies.

Most water treatment plants along the western Lake Erie shoreline treat their water to combat the algae. Toledo spent about $4 million last year on chemicals to treat its water and combat the toxins.

Most big employers say they are mandating COVID-19 vaccines