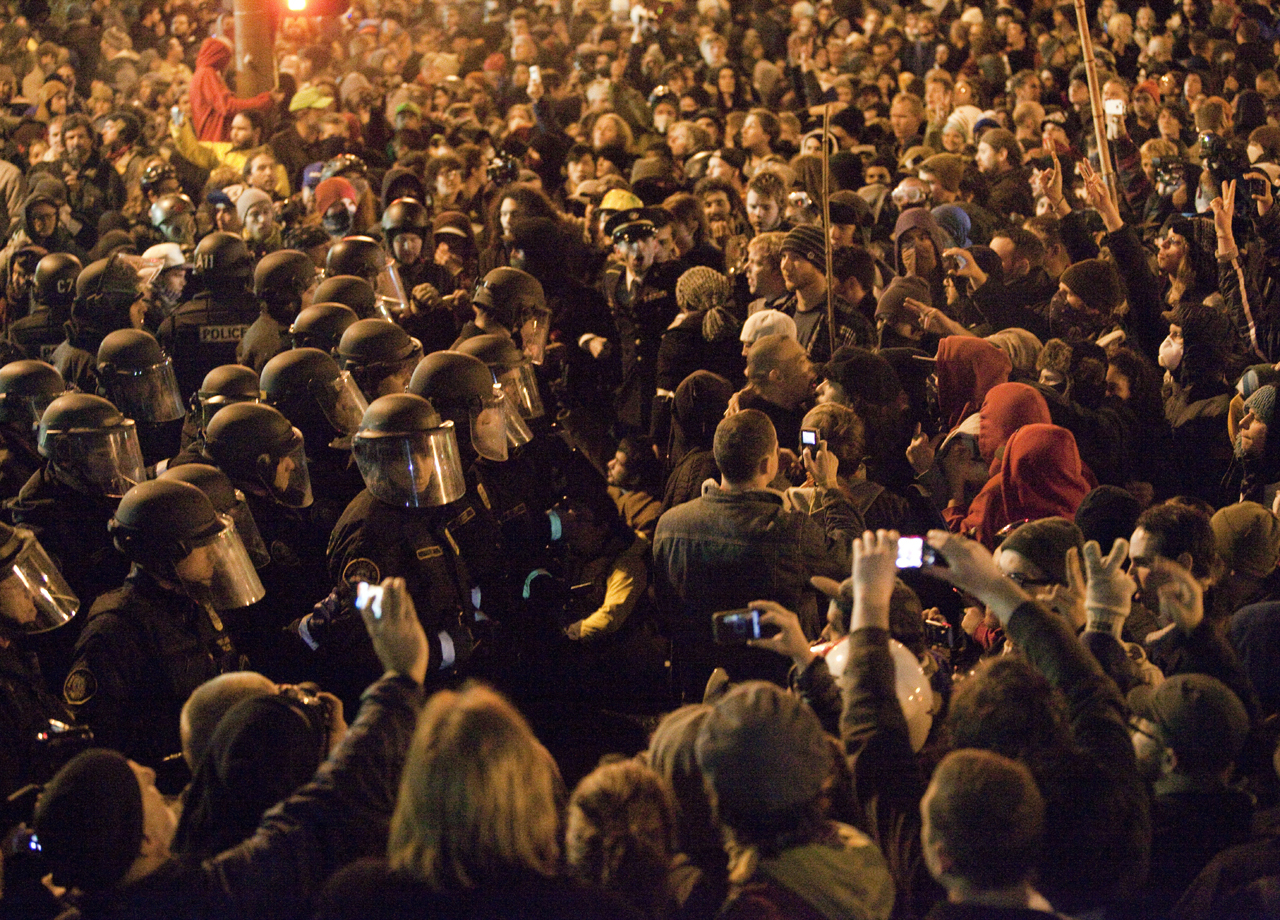 PORTLAND, Ore. - Several hundred protesters, some wearing goggles and gas masks, marched past authorities in a downtown street Sunday, hours after riot police drove Occupy Portland demonstrators out of a pair of weeks-old encampments in nearby parks.

Police moved in shortly before noon and drove protesters into the street after dozens remained in the camp in defiance city officials. Mayor Sam Adams had ordered that the camp shut down Saturday at midnight, citing unhealthy conditions and the encampment's attraction of drug users and thieves.

The number of demonstrators began to swell following the raid and increased throughout the afternoon. By early evening, hundreds of officers brandishing nightsticks stood shoulder-to-shoulder to hold the protesters back. Authorities retreated as protesters broke the standoff by marching through the streets.

In the hours after the midnight eviction deadline, the anti-Wall Street protesters and their supporters had flooded the park area even as authorities in other cities across the nation stepped up pressure against demonstrators, arresting dozens of people.

At one point overnight, the Portland crowd swelled to thousands. As dawn arrived, riot police had retreated and most of the crowds had gone home, but protesters who have been at the two parks since Oct. 6 were still there, prompting one organizer to declare the night a victory for the movement.

"We stood up to state power," Jim Oliver told The Associated Press.

Police moved in later as demonstrators held a midday "general assembly" meeting to discuss their next moves. An officer on a loudspeaker warned that anyone who resisted risked arrest and "may also be subject to chemical agents and impact weapons." Demonstrators chanted "we are a peaceful protest."

"We were talking about what we were going to do and then they just started hitting people. Seems like a waste of resources to me," protester Mike Swain, 27, told the AP.

One man was taken away on a stretcher; he was alert and talking to paramedics, and raised a peace sign to fellow protesters, who responded with cheers.

Choya Adkison, 30, said police moved in after giving demonstrators a false sense of calm. They thought they had time to rest, relax and regroup, she said

"Camp was completely vulnerable, completely defenseless" when police moved in, she said. "I'm disappointed that they created a sense of trust by walking away and then completely trampled it."

"I think most people will go home or go about their day," Simpson told the television station.

Even ahead of the police raid, the camp was a shadow of what it had been before Saturday. A large segment of campers were homeless people drawn to the free food and shelter offered by Occupy Portland. They are gone, after outreach workers went through the camp to help them find shelter elsewhere.

And as the Saturday midnight eviction deadline neared, protesters themselves began dismantling tents.

Around 4 a.m., dozens of police formed a line across from demonstrators who had poured into the street. Protesters facing them appeared to be in festive spirits with some banging on drums and plastic pails, another clanging a cowbell while others danced in the streets as a man juggled nearby.

On Sunday at an impromptu news conference, the mayor defended his order to clear the park, saying it is his job to enforce the law and keep the peace. "This is not a game," Adams said.

Officials said that one officer suffered minor injuries when he was hit by some kind of projectile in the leg. Police had prepared for a possible clash, warning that dozens of anarchists may be planning a confrontation with authorities. Officers seized pieces of cement blocks Friday, saying they were told some demonstrators had plans to use them as weapons against police.

Also Sunday, for the third time in three days, city officials in Oakland, California, warned protesters that they do not have the right to camp in the plaza in front of City Hall and face immediate arrest. Police did not respond to requests for comment on whether officers were preparing to forcibly clear the camp.

The eviction notices come as officials across the country urged an end to similar gatherings in the wake of three deaths in different cities, including two by gunfire. Demands for Oakland protesters to pack up increased after a man was shot and killed Thursday near the encampment site.

Police officials have said a preliminary investigation suggested the shooting resulted from a fight between two groups of men at or near the encampment. Investigators do not know if the men in the fight were associated with Occupy Oakland, but protesters said there was no connection between the shooting and the camp.

The shooting occurred the same day a 35-year-old military veteran apparently committed suicide in a tent at a Burlington, Vermont, Occupy encampment. Police said a preliminary investigation showed the veteran fatally shot himself in the head. They said the death raised questions about whether the protest would be allowed to continue.

Salt Lake City, Utah: Police arrested 19 people Saturday when protesters refused to leave a park a day after a man was found dead inside his tent at the encampment. The arrests came after police moved into the park early in the evening where protesters had been ordered to leave by the end of the day. About 150 people had been living in the camp there for weeks.

Albany, N.Y.: Police arrested 24 Occupy Albany protesters after they defied an 11 p.m. curfew in a state-owned park. State police officials hauled away the protesters after warning them with megaphones that they were breaking the law in Lafayette Park. They were charged with trespassing.

San Francisco, Calif.: Police said two demonstrators attacked two police officers in separate incidents during a march on Saturday. Police spokesman Carlos Manfredi said a protester slashed an officer's hand with a pen knife while another protester shoved an officer, causing facial cuts. He said neither officer was seriously hurt, and the assailants couldn't be located.