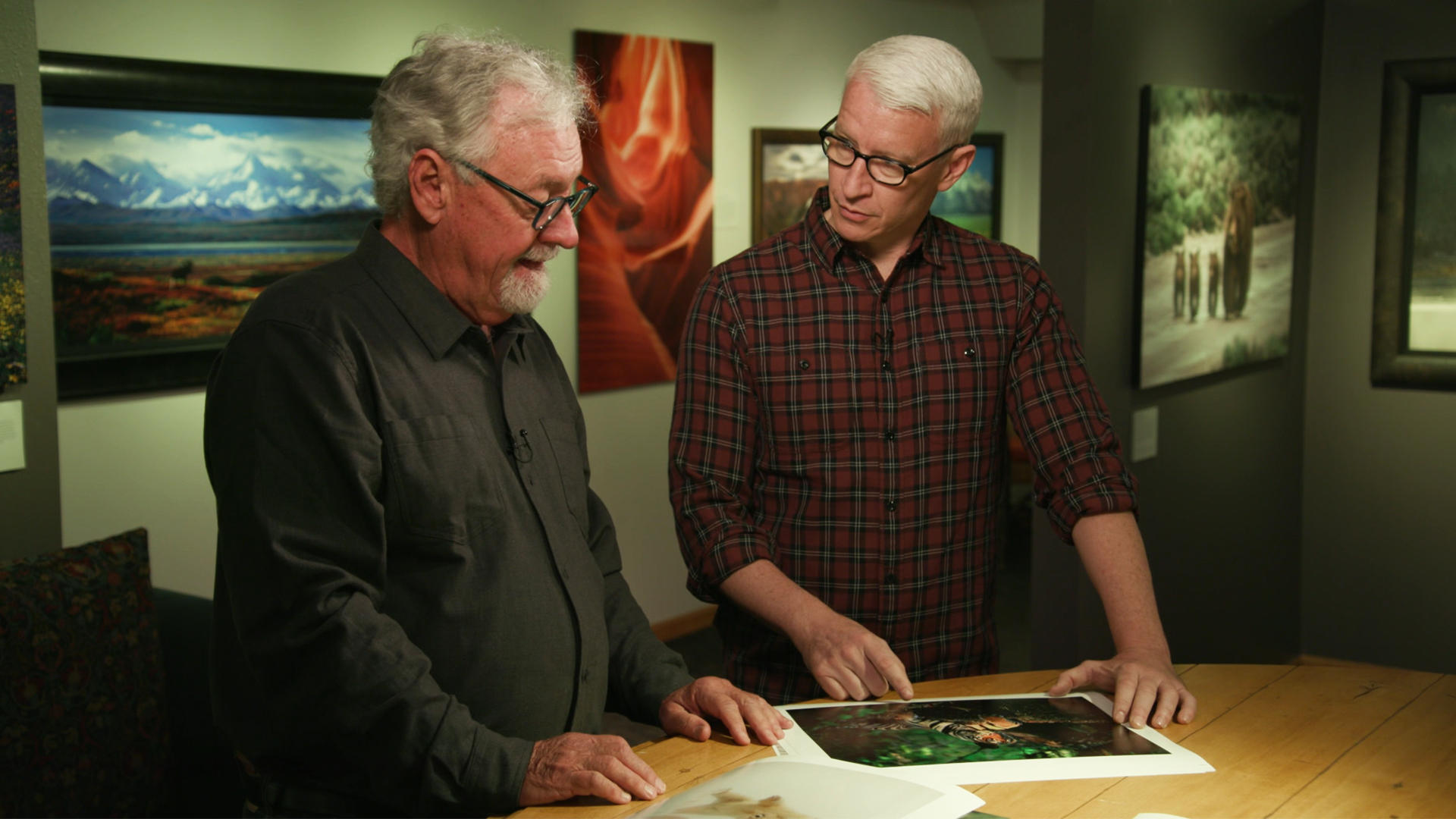 The brown bear stands on her hind legs, looking out through the sagebrush. Flecks of grey speckle her dark fur, and the claws on her front paws rest slightly in front of her. Her eyes are fixed ahead at something out of the frame — her cubs. She is Grand Teton National Park's grizzly No. 399, and she's wildlife photographer Thomas D. Mangelsen's muse.

This week on 60 Minutes, correspondent Anderson Cooper turns the camera on Mangelsen, who has photographed some of the world's most spectacular images of wild animals. Mangelsen invited 60 Minutes into his studio, where he told Cooper the stories behind some of his most compelling photographs.

Mangelsen has documented almost every facet of 399's life for more than a decade, including giving birth to three sets of triplets and two sets of twins. He tells Cooper that 399 inspires him: "Her intelligence, her behavior, her beauty," he says in the video above. "The fact that she's had all these offspring. There's not many bears that I know of that's had three sets of triplets."

Mangelsen named the portrait of 399 standing and keeping watch over her cubs "The Matriarch" and says the image "shows to me all her glory." But not everyone agreed. Mangelsen says it took him two years to convince people that the photograph was suitable for hanging in a gallery because 399's teats are visible.

"We might be just a little too Puritan sometimes,' Mangelsen says. "But to me, it's about her being a real bear and standing. And she's a mother bear. Look at her claws. That says motherhood all over."

Mangelsen is a patient man. He once spent 42 days with cougars in Jackson Hole, Wyoming while waiting for the perfect shot, until finally, an elusive female stepped out of her den and into his frame. In British Columbia's Great Bear Rainforest, he waited for days, hoping a black bear would wander up a cluster of moss-covered rocks.

On the sixth day, a black bear did just that. It stopped at the top of the rocks and stood there, looking over its domain, silhouetted against the misty, overcast sky.

Mangelsen's visualization paid off. "Maybe if you wish hard enough, your dreams come true," he says.

Mangelsen doesn't have just one favorite bear. Another favored grizzly is nicknamed Blondie, inspired by the wheat-color hair around her face.

One day in Grand Teton National Park, Blondie paused mid-graze, surveying the meadow along Pilgrim Creek, and Mangelsen snapped her photo. Her hair is still spiky from a recent rain, and a small blade of grass juts out of the corner of her mouth, almost like a toothpick. Mangelsen's editor suggested removing the grass from the image, but Mangelsen declined, saying, "That piece of grass makes the picture."

Well, he says, it helps.

Mangelsen named the image "Eyes of the Grizzly," because to him, Blondie's eyes tell her story.

"Her eyes tell you a lot about her personality, I think, and her character and her beauty," he says.

Like all photography, Mangelsen's images record a specific time and place, sometimes documenting things that no longer exist. His image "Born of the North Wind" does just that.

Amid a frigid, windswept landscape a lone polar bear stands, ready to begin his hunt. A small, white Arctic fox stands next to him, almost camouflaged against the ice and snow. The sun is setting, and the sky streaks from blue to a pink-orange.

"That tells me, 'This is polar bear land,'" Mangelsen tells Cooper in the clip above. "'This is the king of the Arctic. This is where he lives.' So that's a kind of picture I strive for."

The photo took Mangelsen almost a decade of striving — and 80,000 frames shot. But he likely wouldn't be as lucky today. He says climate change means the bay doesn't freeze like it used to.

"Now when I went up there about four years ago, the shoreline was ice-free," Mangelsen says. "And that's what is sad because this is the southernmost population of polar bears, which will go first."

The tiger is lounging, its right paw draped over a rock. Sunlight streams through the surrounding thicket of trees to illuminate the tiger's face and a smear of blood, a leftover from a recent meal.

The image itself is stunning — and then Mangelsen explains that he shot the photograph while riding on the back of an elephant.

Mangelsen says his heart was pounding as he snapped away, hoping at least one frame would capture the light while keeping the tiger in focus. "Today with digital, you could do that fairly easily, in the sense of not worrying about shutter speed, but that's slow film," he says.

After five decades of traveling the world and documenting animals, Mangelsen says the image is one of his favorites.

The videos above were edited by Terry Manning and Lisa Orlando.