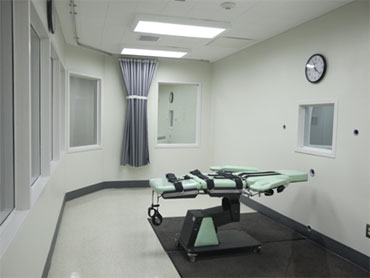 (CBS/AP) ATLANTA - A severe shortage of a key drug in administering the death penalty by lethal injection seems likely to get worse, after a pharmaceutical company in India announced Thursday it was no longer selling the drug to American prison officials, due to ethical concerns.

Kayem Pharmaceutical has previously supplied sodium thiopental to at least one U.S. state and had reached out to a half dozen others. The company was fast becoming a major supplier of the drug, a sedative in the three-drug lethal injection cocktail that most of the 34 death penalty states use.

The sole American manufacturer stopped making the drug last year, and since then at least seven states have obtained the scarce drug overseas; others got it from fellow states.

the "ethos of Hinduism."

Nebraska announced in January it had acquired 500 grams of the drug from Kayem, and a company salesman said he also sold the drug to South Dakota prison officials. The salesman, Tony Atwater, said he and a colleague reached out to about eight states.

"We were seeing a lot of interest in sodium thiopental, but states are scared," said Atwater, who is planning on leaving the firm. "They want to wait until all the lawsuits are hashed out."

The Drug Enforcement Administration seized Georgia's entire supply of sodium thiopental in March amid questions in a condemned inmate's lawsuit about whether Georgia circumvented the law in obtaining the drug from an English company. And DEA agents last week also took the Kentucky's and Tennessee's supply, effectively preventing executions in the three states.

The sodium thiopental supply shortage began when Hospira Inc. of Lake Forest, Illinois, stopped making sodium thiopental last year, and grew worse in January when it announced it would not resume production. Another supplier, British firm Archimedes Pharma Limited, has said the firm does not directly export the drug to the U.S. and that it doesn't keep information on its product users.

South Dakota, which announced Wednesday it had purchased enough sodium thiopental to carry out the executions of its two death row inmates, did not immediately comment on how it obtained the drug.

As the shortage worsens, some states are switching to alternatives. Ohio and Oklahoma have used pentobarbital, a stronger sedative often used to euthanize animals, by itself to execute inmates.

Texas, the nation's busiest death row state, is swapping out sodium thiopental in favor of pentobarbital in its three-drug cocktail. Mississippi and Arizona are considering similar moves.

Officials in Nebraska, which bought the drug from the Indian firm for about $2,000, declined to comment on Kayem's decision. Corrections spokeswoman Dawn-Renee Smith said the state still has its sodium thiopental.

Complete of the lethal injection issue on Crimesider