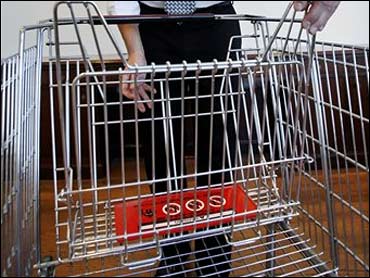 Most injuries occur when children aren't strapped in and fall while standing in carts. But many shopping carts are designed with a high center of gravity, making them prone to tipping over even when children are properly placed in the seating area, said Dr. Gary Smith, chairman of an academy committee that wrote the new policy.

Falls onto hard grocery store floors can result in head and neck injuries, and fractures also are common, according to the policy published Monday in the August edition of Pediatrics.

Many injuries involve concussions and are life-threatening, said Smith, an emergency room physician at Children's Hospital in Columbus, Ohio and director of the Center for Injury Research and Policy there.

"Because of that, and because we don't have a standard that adequately addresses the major mechanisms of injury, the best we can do is to caution parents that these injuries are very real, they're very frequent, and if you have a possible alternative" to standard shopping carts, use it, he said.

Alternatives include strollers, wagons, and carts some stores provide that have plastic mini-cars or trucks attached to the front, allowing children to ride much closer to the ground.

During a report on the shopping cart recommendations Monday, The Early Show medical correspondent Dr. Emily Senay told of a new study from the American Academy of Pediatrics highlighting another danger to children: escalators. From 1990 to 2002, about 2,000 kids a year were injured on escalators, with the majority under five-years-old. The most common injuries were lacerations after getting caught in the escalator after a fall. Many of the injuries involved strollers. The researchers say parents should always supervise children on escalators, and never take kids in strollers onto them. Be mindful of youngsters getting tangled in the spaces at the top or bottom of escalators, or along the sides. The researchers also suggest reducing the space between the escalator steps and sidewall, or shielding the space, to reduce the risk of getting trapped. To watch Senay's report on shopping carts and escalators, .
Dawn Tolan, a Columbus, Ohio, woman whose 2-year-old daughter fell from a shopping cart in April, said the new policy is needed to make parents aware of the dangers.

Tolan said her daughter, Ellie, stood up in a cart and fell to the floor on her head just as she reached for the child. Hospital tests revealed no serious injuries, but Tolan said the accident "has definitely changed the way I shop."

Now she avoids stores that don't have carts with mini-cars.

According to the academy, about 23,000 U.S. children are treated in emergency rooms for shopping cart-related injuries each year. Last year the total was about 24,200, including 20,700 injuries in children younger than 5.

Smith said injury experts have been aware of the problem for at least 30 years, but no industry standard was adopted until 2004. It is only voluntary, doesn't require specific designs and lacks "clear and effective performance criteria" to address cart stability and prevent falls and tip-overs, the academy policy says.

State and federal laws should be enacted to require minimum safety standards for shopping carts, according to the policy.

In the meantime, pediatricians should warn patients and parents about the dangers, it says.

Children should not be left unattended or allowed to stand up in shopping carts, and shouldn't be allowed to ride in the main grocery basket of the cart or on the outside, the policy says. Seat-belts and other restraints should be worn at all times in the cart, it advises.

The U.S. Consumer Product Safety Commission issued a similar safety alert in May. CPSC spokeswoman Patty Davis said the agency shares pediatricians' concerns, but added: "Our mandate from Congress is to pursue voluntary standards before we take a mandatory route."

Dr. Joseph Russell, a Plainfield, Ill., pediatrician who has treated several children with shopping cart injuries, said he worked with an engineer to create a prototype in which the child's seat area is much closer to the bottom of the basket, making the cart less likely to tip over.

Russell is trying to get manufacturers interested in the design.

"Even if you use a safety strap, it doesn't address the center of gravity," Russell said. "If the child is strapped in and the cart tips over, where is the benefit?"