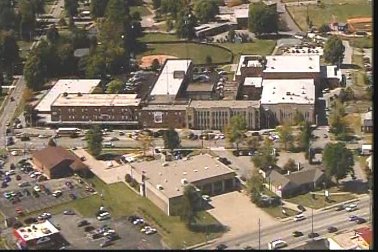 LOUISVILLE, Ky. - One student was injured and one person was being sought after a shooting at a high school in southern Louisville, police said Tuesday.

The student had non-life threatening injuries and was reunited with parents at University Hospital, Officer Phil Russell said. He didn't say if the injured student and shooter knew each other or if the shooter was a student at Fern Creek Traditional High School.

CBS affiliate WLKY reports the injured student is a male.

Russell said the suspect left the 1,400-student school immediately after the shooting.

Video from television stations showed police escorting students with their hands over their heads out of the school to a nearby softball field.

Tiata Rodgers, parent of a senior at Fern Creek, said her 17-year-old son called right after hearing a gun shot.

Rodgers said her son whispered into the phone, but she didn't believe him. Rogers said her son told her, "No this is real. They're shooting." The student said after the shooting "everybody just went running everywhere, shoving kids in classrooms and locking the doors," Rodgers said.

Rodgers lives nearby and made a beeline for the campus.

"I jumped up and ran over here," Rodgers said.

Jefferson County Public Schools spokesman Ben Jackey said the school went into lockdown. After police arrived, students were led out before being taken to an area park for dismissal.

Students at a nearby elementary school with a later dismissal were restricted to their building, Jackey said.

"This is senseless. This is unacceptable," Jackey said. "This cannot happen in our school. This is not the type of things students should be exposed to."

Traffic around the school was backed up as parents streamed into the area to pick up their children. Officers were directing traffic to a nearby park, but parents were parking their cars and walking down the street to meet their children.

The school, which opened in 1923, concentrates on communications, media and arts. It has a student-run radio station, WFHS.

Earlier Tuesday, a student was shot by a fellow student outside a North Carolina high school just minutes before classes began, and the suspect then waited for police to arrive, authorities said.

That shooting happened around 7:40 a.m. as the two male students argued in an on-campus courtyard at Albemarle High School, Albemarle Police Chief William Halliburton said at a news conference.

The shooter put down his gun after firing two shots, walked into the principal's office and waited for police, Halliburton said.