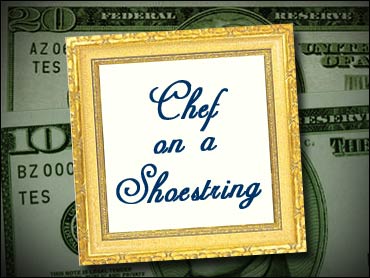 Every week on the Saturday Early Show, a prominent chef is given a fixed budget to create a three-course meal for four.

These recipes are created by some of the most celebrated chefs in the country. Although they are made on a budget, they are extravagant in taste.

Starting this week, chefs taking part in the Shoestring challenge get $40 to prepare a meal for four. That's up from $30 last week - a 25 percent increase.

But don't panic, this doesn't mean your food bills are skyrocketing.
This is the first hike in our Chef on a Shoestring budget in about three years. The best explanation is perhaps not that food prices have been running out of control, but that the sophistication and taste of the cooks out there is on the rise.

Although milk costs over 20 percent more than a year ago, paychecks have been keeping up with the 3 percent inflation rate, so things aren't as bad as they might seem.

In the past three years, the overall average cost to feed a family at home has increased 7.1 percent, according to government statistics. Inflation has run at just about 7 percent, so as long as you are getting a small 2.4 percent raise every year, you are not falling behind.

Some groceries, however, are sharply more expensive. Over the past three years, since the last Chef on a Shoestring budget hike, milk has seen a 16.3 percent rise and meat has gone up 13 percent.

On the other hand, the price of some foods has not kept up with inflation, making them relatively more affordable. Wine only increased by 1.8 percent, fish by 3.4 percent, and spices by 3.1 percent.

The Chef on a Shoestring challenge started seven years ago with a $20 budget.