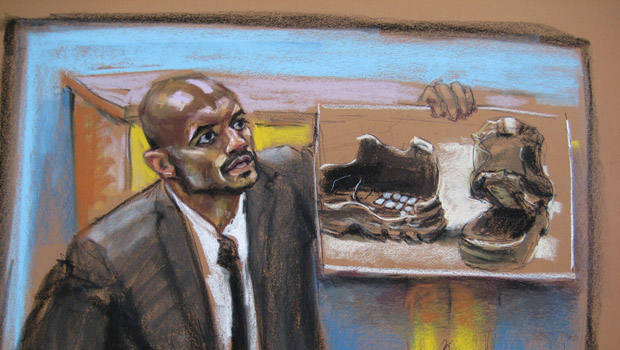 NEW YORK - A British man testifying in the terror trial of Osama bin Laden's son-in-law said Tuesday he flew on planes over the Middle East and Europe with explosives in a shoe after the Sept. 11 attacks but didn't detonate them because he was saving the bomb for an attack over America.

Saajid Badat revealed details of the plot as he testified for a second day at the New York City trial of Sulaiman Abu Ghaith, bin Laden's son-in-law and al Qaeda's spokesman after the Sept. 11, 2001, attacks.

Badat testified he wore a shoe bomb on at least one flight from Karachi, Pakistan, to Holland and another from Holland to Great Britain in December 2001, choosing not to detonate it because he wanted to use it for an attack against an American aircraft.

He said he was left with only one shoe because he gave his other shoe-bomb in early December 2001 to some Malaysian men who wanted to blow open a plane's cockpit door and carry out a Sept. 11-style hijacking of their own. Afterward, he flew from Pakistan to Holland and then on to Great Britain.

"I was wearing the shoe," he said, referring to the shoe bomb.

Prosecutors are using the 34-year-old Badat's testimony to show Abu Ghaith played a pivotal role with al Qaeda when he warned Americans "the storm of aircrafts will not stop" on videotapes widely distributed after the Sept. 11 attacks.

Abu Ghaith could face life in prison if he is convicted of conspiring to kill Americans and providing material support to al Qaeda. He is the highest-ranking al Qaeda figure to face trial on U.S. soil since 9/11.

At one point on cross examination, he was asked about a moment after Sept. 11 when he and others laughed as professed mastermind Khalid Sheik Mohammed crossed the World Trade Center's twin towers off a list of the world's tallest buildings.

"Unfortunately, yes," he said with a sheepish expression.

Badat said his eagerness to carry out a suicide mission following more than three years with al Qaeda operatives in Afghanistan wilted when he visited his parents in Gloucester, England, in December 2001 and they asked what he'd done in Afghanistan.

"You'd better not be one of those sleepers," Badat said his father told him.

His mother warned that she "wouldn't want my son to be one of those sleepers," he recalled.

"It was then I decided to back out of the mission," Badat said in testimony from London shown on video screens in a Manhattan courtroom.

Badat, wearing a gray suit with a narrow black tie, sat across from Assistant U.S. Attorney Nicholas Lewin and Cohen as he recalled being asked in late September or October 2001 whether he'd be willing to carry out a suicide attack.

He said bin Laden met with him soon afterward, telling him that the American economy was like a chain.

"If you break one link, you'll bring down the American economy," Badat said bin Laden told him. He said al Qaeda's leader also described sections of the Quran to read if he got scared.

Badat, who was sometimes called "sheik" because he had memorized the Koran by age 12, said he saw bin Laden between 30 and 50 times in al Qaeda training camps, including once when he gave awards to one of his sons and to a man who was one of the Sept. 11 hijackers.

Badat was testifying by videotape because he refuses to come to the United States because he was indicted in 2004 in Boston on charges he conspired with shoe-bomber Richard Reid. He faces charges including conspiring to destroy an aircraft and conspiracy to commit homicide.

He described his changing views about jihad as he was cross examined aggressively by Cohen.

The lawyer questioned him about experiments involving poisons conducted in Badat's presence on rabbits and dogs, asking if he was bothered by animals screaming out in pain as they died.

Badat tried to justify the experiments, saying it was similar to what scientists do on animals. He said his instructor at an al Qaeda camp called out references to American presidents Bill Clinton and George W. Bush and former Israel Prime Minister Ariel Sharon as the animals were being killed. Earlier, he had testified that faces of the presidents and Sharon were used as targets during al Qaeda weapons training exercises.

"This is Clinton! This is Bush! This is Sharon!" he recalled the poison instructor shouting.

Badat testified that he believed violent acts were an obligation for him, "just like prayer, fasting or doing charity."

"Blowing up airplanes was part of your responsibility?" Cohen asked.

"It was gradual, but yes," Badat said.

Badat said he once admired the Sept. 11 hijackers.

Even after quitting the shoe-bomb plot, he said he separated the detonator from the charge but kept the explosives at his home until his 2003 arrest. He eventually pleaded guilty in Great Britain and served more than six years in prison, winning early release by cooperating with British and American authorities.

He said he kept the explosives because though he quit the shoe-bomb plot, "I hadn't really switched my views."

Badat said he thought "maybe there would be a time I would need it again."