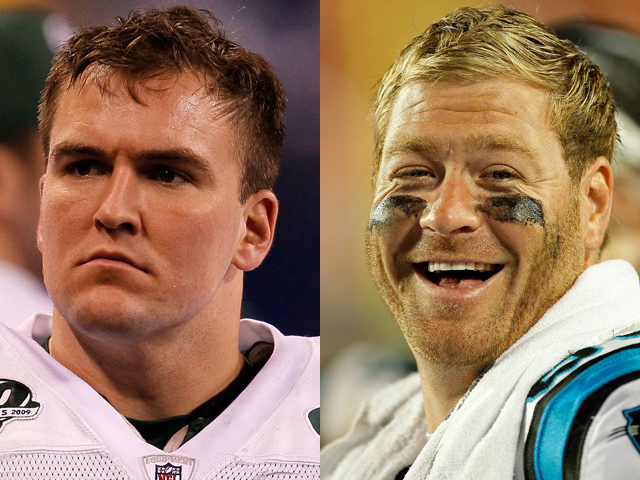 Jeremy Shockey may no longer be a Saint but he is very much a hero in the eyes of teammate Ben Hartsock.

Shockey, who left the New Orleans Saints for the Carolina Panthers in the offseason, came to the rescue of Hartsock, who began choking while eating lunch at the team facility on Tuesday.

According to the National Football Post, Hartsock was eating pork tenderloin when a piece of the meat got lodged in his throat. The Panthers tight end drank water to try to dislodge the food, but that didn't work and he couldn't breathe.

"(Hartsock) started to go to the bathroom and I don't know if he collapsed, but he couldn't breathe," agent Mike McCartney told the NFP. "Some new guy came and tried to give him the Heimlich. It didn't work. Then, Shockey hit him in the back pretty hard and out came the meat. The Panthers told me it was really scary."

"Ben told me, 'Shockey came over and gave me the Heimlich Maneuver and saved my life,'" McCartney added. "He was in good spirits and he's real thankful for Shockey."

Shockey himself has had two offseason health scares. Last year in New Orleans, he was rushed to the hospital after suffering a seizure in the Saints' weight room. And before the 2009 training camp began, he had to be hospitalized after passing out from dehydration at a party in Las Vegas.

Amazingly, Shockey's food-dislodging move on Tuesday was not the only one in the sports world this week. According to the Washington Post, Nationals beer vendor Emmanuel Marlow performed the Heimlich and saved a young fan who was choking on food at a game in D.C. on Thursday.

As for Hartsock, he may have nearly died but the episode was ammunition for his amused teammates, who began a new rallying cry at practice: "Don't choke, Hartsock!"