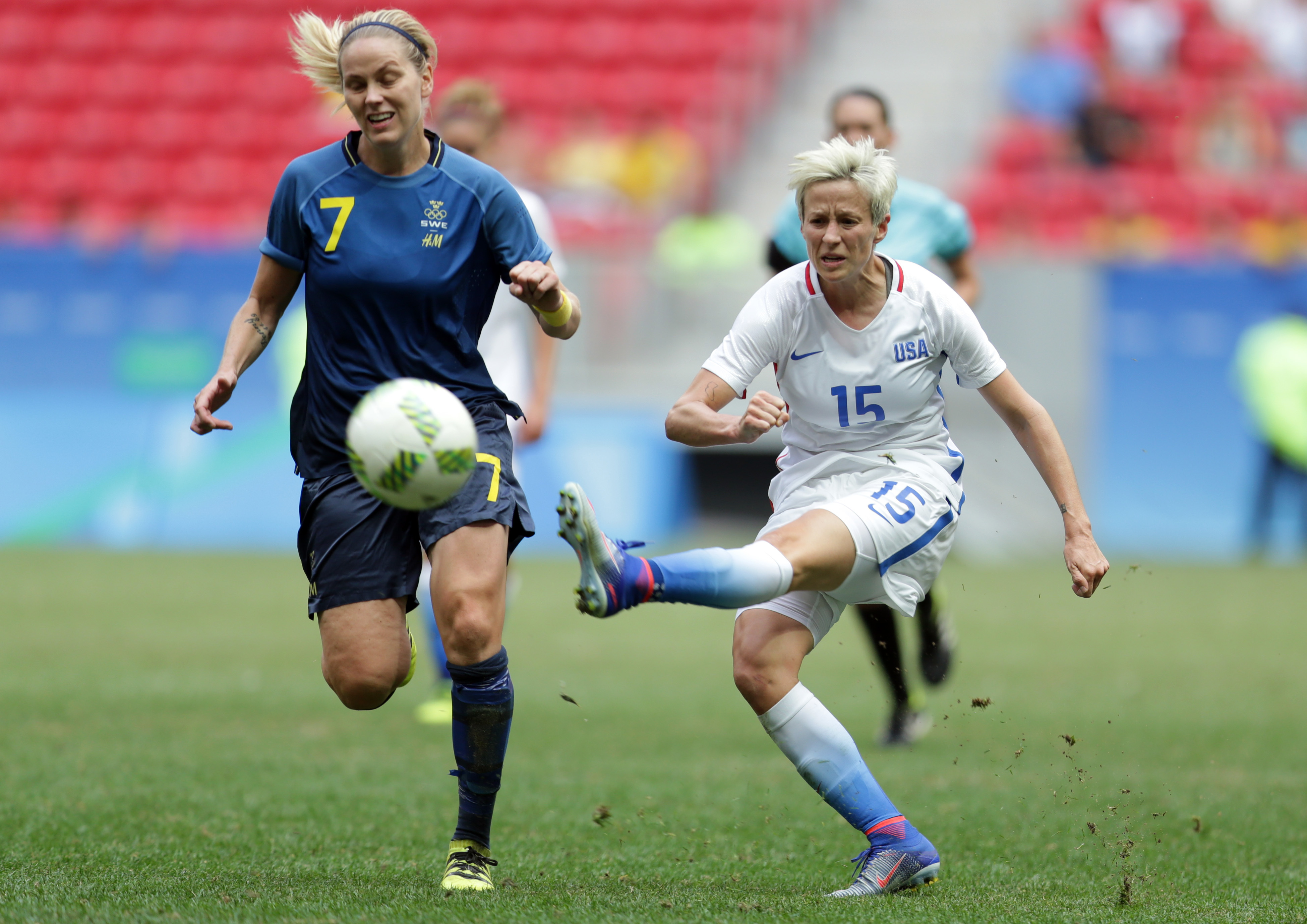 BRASILIA, Brazil - The three-time defending champion U.S. women's national team will miss the Olympic final for the first time after being ousted by Sweden on penalties following a 1-1 draw in the quarterfinals on Friday.

Tied after three rounds in the shootout, Sweden captain Caroline Seger beat Hope Solo and Christen Press' attempt against Hedvig Lindhal went over the net. With the next kick, Lisa Dahlkvist beat an outstretched Solo for the win.

As Sweden celebrated, U.S. captain Carli Lloyd crouched on the field at Mane Garrincha Stadium. It was the first time that an Olympic women's match had gone to penalties.

It was the earliest the United States had ever been eliminated from the Olympics since women's soccer became a sport in 1996.

Taunted by local fans since the Olympics began and stinging from a surprising loss, Hope Solo called Sweden a "bunch of cowards."

The U.S. goalkeeper criticized the Swedes for the way they played Friday in beating the Americans.

"I thought we played a courageous game," Solo said. "I also think we played a bunch of cowards. The best team did not win today. I strongly and firmly believe that."

The Swedes beat the U.S. 4-3 on penalties following a 1-1 draw in the quarterfinals. They will next face either Australia or host Brazil.

"It's OK to be a coward if you win," responded Sweden coach Pia Sundhage, the same woman who coached the United States to back-to-back Olympic gold medals in 2008 and 2012.

After a scoreless first half, Stina Blackstenius scored in the 61st minute to give Sweden a 1-0 lead.

Alex Morgan scored the equalizer in the 78th and the match went to extra time. Lloyd had a header called back for offside in the 115th minute, and Lotta Schelin was offside on her attempt against Solo a minute later - although replays appeared to show otherwise.

The reigning World Cup champions, who are also four-time Olympic champions, had not dropped a match this year. But it Sweden that will play either Australia or host Brazil in the semifinals.

Blackstenius, who came in as a substitute in the first half, broke away and shook off defender Julie Johnston to beat Solo and give Sweden the lead. It was just her second international goal.

Sweden's coach, Pia Sundhage, high-fived her assistants on the bench. Sundhage coached the U.S. team for five years and led the squad to gold medals in both Beijing and London.

The United States got the equalizer with Morgan's shot that bounced off a Sweden defender. It was Morgan's team-leading 13th goal of the year. Lloyd nearly put the United States ahead in the 85th but her kick to the far corner went just wide.

The Americans won their first two matches in Brazil before a surprising 2-2 draw in Manaus against Colombia, which had already been eliminated.

Johnston returned to the starting lineup after missing the last two games with a groin injury and coach Jill Ellis played all her regular starters after rotating and resting many against Colombia in the heat and humidity of the Amazon. Megan Rapinoe, who started against Colombia after missing more than eight months after right knee surgery, was on the bench but came on as a substitute in the second half.

Sweden had won only five matches against the United States. The two teams played to a scoreless draw at last year's World Cup. The last time the two teams met in the Olympics was at the 1996 Atlanta Games. Sundhage was a player on the Sweden team that fell 2-1 to the Americans.

Ranked sixth in the world, Sweden had struggled in its Olympic group with a 5-1 loss to host Brazil and finished 1-1-1.

Lloyd buried her head in her hands early in the second half after her free kick was off the mark. Just moments later, she had another that was off-target, too. The United States struggled to finish throughout the match.

The crowd at Mane Garrincha Stadium in was sparse at the start of the match and never extended much past the lower bowl of the massive 72,000-seat stadium that was reconstructed and expanded for the men's 2014 World Cup.

The fans that were there continued to jeer Solo with shouts of "Zika!" everytime she touched the ball. The fans have taunted her since the opening match in Brazil because of her posts on social media about the virus.