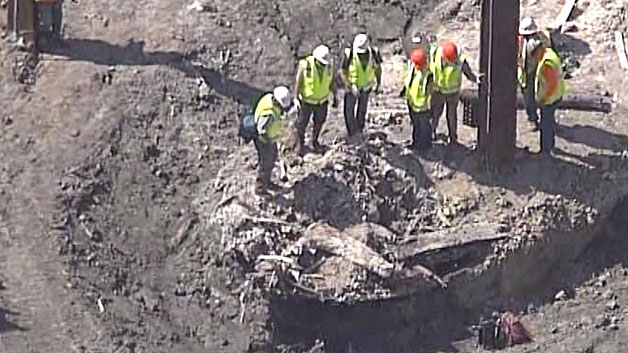 BOSTON -- An old shipwreck has been found buried in Boston's Seaport District and, according to the city's archaeologist, it is a rare find.

"This is the first shipwreck that I know of in Boston discovered in filled land," City archaeologist Joe Bagley told CBS Boston WBZ-TV. "This is the largest and most significant by far."

The ship, a wooden sloop at least 50 feet long from the mid-to-late 1800s, was uncovered late last week during construction of a new building at 121 Seaport Boulevard. It was found about 25 feet below grade.

The construction company, Skanska, met with city officials to discuss the discovery and several archaeologists are now inspecting the site, CBS Boston reported.

"You certainly come across a lot of interesting things when you do below-grade excavation, but I've never seen anything like this in my career," said Skanska president and CEO Shawn Hurley. "I can say in my entire career I've never come across an artifact."

Bagley said it appears the vessel was carrying lime, which was used for masonry and construction. He said there are partial barrels containing lime at the site.

The area where it was found was once called the Dorchester Flats. Bagley said this is the first time a shipwreck has been found in this section of the city. He said he isn't yet sure what caused the shipwreck.

"At this point we're not quite sure, because it's definitely in an area that was mud flats at low tide, so the ship may have run aground or crashed here during a storm," said Bagley.

Bagley theorizes that the crew unloaded most of the valuables and set part of the ship on fire to reduce its weight as it sank in the mud.

Hurley said his company immediately halted excavation in the area and contacted authorities who could tell them more about the boat and how best to move around the site, WBZ reported.

Hurley said stopping construction on the 400,000-square-foot office building costs money, and there was no legal obligation to halt the work, but Skanska just wanted to be open and transparent with the city.

"The City of Boston is extremely fortunate that Skanska has decided to stop the project temporarily to let the archaeologists come in and document this really important piece of maritime history," said Bagley. "Were doing it as fast as we can to make sure not to cause any undue delay to the project."

On Thursday, archaeologists hope to bring in 3D imaging equipment to create a 3D map of the boat.