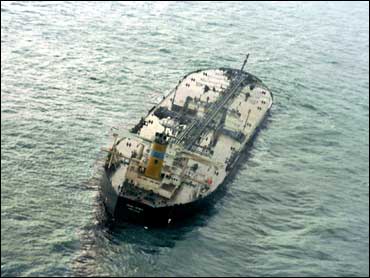 South Korea's Coast Guard dispatched dozens of ships Friday to prevent crude oil that leaked from a supertanker from reaching an ecologically sensitive shoreline on the country's west coast.

About 66,000 barrels (2.7 million gallons) of crude oil gushed from the 146,000-ton Hong Kong-registered tanker after a crane-carrying vessel slammed into it Friday morning, the Coast Guard said.

Strong winds and prevailing currents meant oil was expected to start washing up on shore by Saturday morning, the Coast Guard said in a statement.

Maritime authorities set up a special fence 5 miles in length to try and contain the oil, the statement said.

The slick was 4.6 miles long and 1.2 miles wide, the Maritime and Fisheries Ministry said.

The size of the leak appeared to be about one-fourth that of the 260,000 barrels, or 11 million gallons, of oil spilled into Alaska's Prince William Sound by the Exxon Valdez in 1989.

The site of the accident was about 7 miles off Mallipo beach, approximately 93 miles southwest of Seoul.

The region is popular for scenic beaches, including Mallipo. It is also home to a national maritime park and an important refueling stop for migratory birds.

The accident occurred at 7:10 a.m. (1710 Eastern Thursday), the Coast Guard said. Cho Sung-won, a regional Coast Guard spokesman, said the leak was stopped at around noon.

The spill was believed to be South Korea's largest, according to the Coast Guard and the Maritime Ministry. A spill in 1995, previously considered the largest, happened when about 5,035 tons - about 35,000 barrels - of crude and fuel oil leaked.

The Coast Guard said that 47 ships and four helicopters were involved in the operation.

The tanker, the Hebei Spirit, and the other vessel, owned by South Korea's Samsung Corp., were in no danger of sinking, the Coast Guard said. There were no human casualties in the accident, it said.

The tanker was at anchor, carrying about 260,000 tons of crude oil - or about 1.8 million barrels - when the accident happened.

The 1995 leak, which occurred in July, caused an estimated 73.5 billion won, which at today's exchange rates is equal to $80 million, in damage.