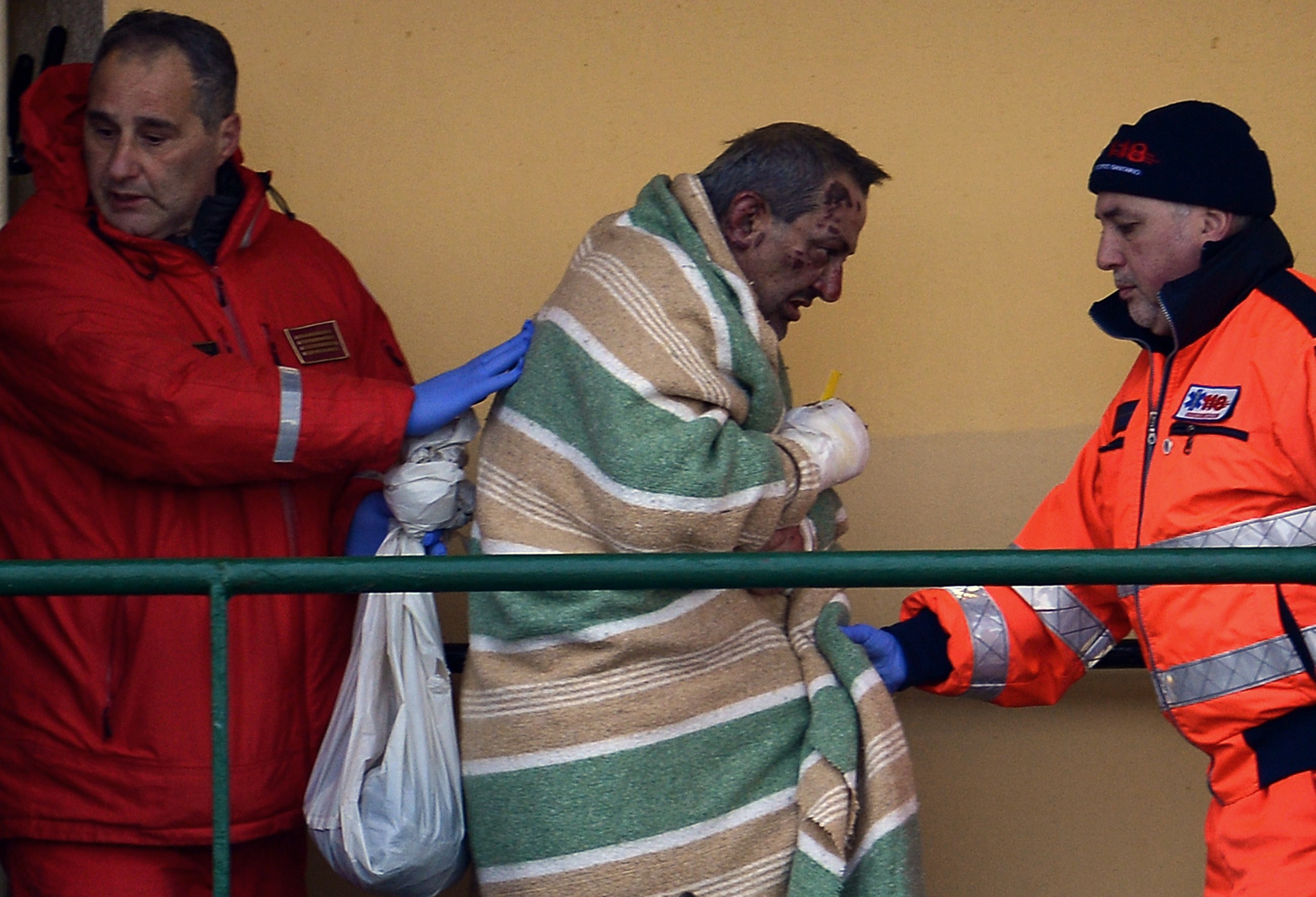 BARI, Italy - The evacuation of the Greek ferry that caught fire off Albania has been completed, and only the vessel's captain and four Italian sailors remain on board to assist in the operation, Italian Premier Matteo Renzi said Monday.

The latest numbers indicate 427 people have been rescued from the ferry, and a total of 10 bodies removed. They include a Greek man who died after become trapped in a lifeboard cute, and four others whose bodies were recovered earlier Monday. Their identities or the circumstances of their deaths were not immediately known.

Helicopters defied high winds, stormy seas and darkness Monday to pluck hundreds of passengers from the ferry, as survivors told of a frantic rush to escape the flames and pelting rain.

Exhausted and cold from their ordeal, 49 passengers reached land Monday in the southern Italian port of Bari, more than 24 hours after fire broke out on a car deck of the ferry making a journey from the Greek port of Patras to Ancona in Italy.

Helicopters worked night and day plucking passengers off the stricken vessel and ferrying them to 10 or so mercantile ships nearby that were summoned to help.

One Greek man died on Sunday after becoming trapped in a lifeboat chute. Greek Coast Guard spokesman Nikos Lagadianos said four more people were found dead on Monday, but the circumstances of their death and identities were not immediately clear. Of the 478 passengers and crew on board the ferry, 427 have been rescued so far, including 56 crew members.

The Greek and Italian premiers separately expressed their condolences to the victims and gratitude to the rescue workers. Greek Prime Minister Antonis Samras said the "massive and unprecedented operation saved the lives of hundreds of passengers following the fire on the ship in the Adriatic Sea - under the most difficult circumstances," while Renzi said the "impressive" rescue efforts prevented "a slaughter at sea."

Passengers accounts emerging Monday painted a picture of a panicked reaction as the fire spread, with passengers choking on the smoke and struggling to figure out how to reach safety as they suffered both searing heat from the ship's floors and driving rain outside. Prosecutors in Bari were opening an investigation into how the fire started.

A Greek truck driver, reached by The Associated Press aboard one of the rescue vessels, described the rescue scene as "a chaos, a panic." He said the fire alarm came after most passengers, alerted by smoke filling their cabins, had gone outside, and that there was no crew in sight to direct passengers.

"Our feet were burning and from the feet up we were soaked," Christos Perlis, 32, told the AP by telephone.

"Everyone there was trampling on each other to get onto the helicopter," said Perlis, who said he and another man tried to impose order.

"First children, then women and then men. But the men, they started hitting us so they could get on first. They didn't take into consideration the women or the children, nothing," Perlis said. He said he reached safety after jumping in a helicopter basket carrying a girl.

Turkish passenger Saadet Bayhan, speaking to Turkey's NTV television from a rescue ship, confirmed that there were no fire alarms and that passengers woke each other up.

"We experienced the Titanic. The only thing missing was that we didn't sink," she said.

Another rescued Turkish passenger, Aylin Akamac, told the state-run Anadolu Agency from a hospital in Brindisi that the rescue operation was disorganized and that there were only three lifeboats on the ferry.

"Those who got out first got on the lifeboats," she said, while the others were made to wait. "We were soaked from the water they doused to extinguish the fire. Our feet froze. People were forced to move closer to the fire to keep warm. We waited outside for hours."

Most evacuees were to be brought to shore later after the rescue was completed, Greek officials said, but one of the cargo ships, the Spirit of Piraeus, left ahead of the pack, reaching Bari just after 7:30 a.m. (0630 GMT) Monday with 49 survivors aboard. The first to disembark was an injured man wrapped in a yellow striped blanket and wearing bandages around his bare feet, helped down the ship's ladder by two rescue workers.

Other evacuees, many wrapped in blankets, made their way gingerly down the ladder with assistance, some thrusting their hands in a victory sign as they waited their turn. Among them were four children. The evacuees then boarded bright red fire department buses. Officials have said hotels have been booked for them around town.

The fire broke out before dawn Sunday on a car deck of the Italian-flagged Norman Atlantic. All day and night, passengers huddled on the vessel's upper decks, pelted by rain and hail and struggling to breathe through the thick smoke.