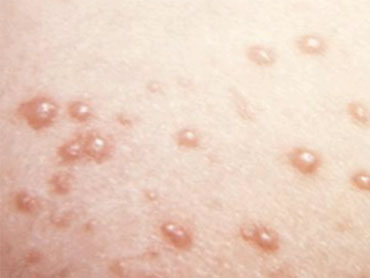 Think you're done with chicken pox just because you had it as a child?

Think again. Chicken pox can reactivate in adults as a condition called shingles. In fact, "Early Show" co-anchor Maggie Rodriguez recently had a bout of shingles, which caused her eye to swell.

Shingles occurs when the chicken pox virus lies dormant in the nerve endings, Ashton explained. It commonly reactivates in people over the age of 50 or 60, and can come out in strips along the skin. Shingles typically affects one side of the body or the other -- not both -- and results in painful blisters. Shingles can affect anyone, but it is more common in older people, or in those with weakened immune systems, or who have been subject to extreme physical or emotional stress.

Why is it so painful?

Ashton said shingles it's because shingles causes "neuropathic" pain -- pain that affects the nerve fibers themselves and the skin around them.

"Pain that involves nerve endings is the most excruciating pain you can have," she said.

Rodriguez said she felt like her nerve was exposed and somebody was "lighting a match to it."

However, there is good news. A vaccine has been approved by the Food and Drug Administration for people over 50 for shingles. The vaccine, Ashton explained, contains a live, but weakened form of the virus, which may reduce the chance getting shingles by 50 percent. Ashton said if you're over the age of 60, you can ask your doctor about it.

As for getting shingles twice, Ashton said, it's not likely.

Ashton said a person cannot catch shingles from another person, but someone who has never had chicken pox -- or been vaccinated against chicken pox - can catch chicken pox from someone with shingles.

Recovery typically takes two to four weeks, but sometimes, 10 to 15 percent of people, can develop a long-lasting, residual pain syndrome called post-herpetic neuralgia (PHN), which is excruciatingly painful. This pain can be treated with anti-depressants, sedatives, non-steroidal anti-inflammatory drug s, and sometimes steroids -- if given early in the course of the condition.