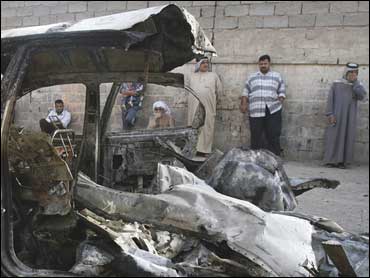 Followers of hardline cleric Muqtada al-Sadr raised the stakes Sunday in the showdown with Iraq's government, refusing to disband their militia. The U.S. military said 40 Shiite militants were killed in fierce fighting in southern Iraq.

Prime Minister Nouri al-Maliki, meanwhile, assured visiting Secretary of State Condoleezza Rice that he will not back down in his confrontation with Shiite militias, even as mortar shells fired from Shiite areas struck the U.S.-protected Green Zone.

In a sign of that resolve, Iraqi soldiers took control Sunday of the last stronghold of al-Sadr's Mahdi Army militia in the southern city of Basra, where an Iraqi offensive last month triggered the current wave of Shiite fighting.

Al-Maliki, a Shiite, has demanded that al-Sadr disband his Mahdi Army, the country's biggest Shiite militia, or his followers will not be allowed to run in provincial elections this fall.

Al-Sadr's followers, who control 30 of the 275 parliament seats, rejected that demand Sunday and instead called for an end to U.S.-Iraqi military operations in Sadr City, the Baghdad stronghold of the Mahdi Army, and Shula, another Shiite district of the capital.

"All must know that disbanding the Mahdi Army means the end of al-Maliki's government," Sadrist lawmaker Fawzi Akram told reporters.

He called the government campaign against the Mahdi Army a "filthy military and media campaign" planned and supported by the Americans. He urged the United Nations, non-governmental organizations and human rights groups to intervene.

"Random air strikes, killings and bloodletting will not help but rather will increase hatred and enmity," he said, adding that if operations continue "all options are open for us."

That could include the formal scrapping of a unilateral truce al-Sadr called last August - a move that American officials credit with helping dramatically reduce violence over the last year.

Since the Basra crackdown began March 25, that truce is in tatters, with fighting in the Baghdad area and scattered clashes still under way throughout the Shiite south.

Al-Sadr accused U.S. and Iraqi forces of "murdering" the "faithful brothers" by "brutal means" in the Nasiriyah fighting and demanded an investigation.

The anti-American cleric has accused the government of exploiting his August truce to crack down on his political movement and warned Saturday that he would declare "open war" if the campaign against him did not stop.

Al-Sadr's statement was broadcast in Sadr City on mosque loudspeakers, raising fears of more bloodshed among the district's 2.5 million people.

In the latest fighting, U.S. soldiers killed 12 militants Sunday in a series of engagements in Shiite areas of Baghdad, the military said.

Nine of them died after gunmen attacked a U.S. checkpoint in Sadr City with machine guns, rocket-propelled grenades and mortar shells, military spokesman Lt. Col. Steve Stover said. There was no report of U.S. casualties.

The deaths were in addition to seven armed "criminals" reported killed by the military on Saturday in Sadr City - two in gun battles and five in two separate air strikes. 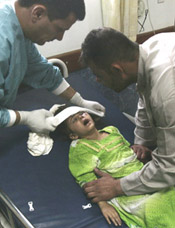 "There was an uptick in violence in comparison with the past couple of weeks," Stover said. "We're not looking for a fight but what we are doing is protecting the Iraqi people."

A full-scale uprising by al-Sadr, who led two rebellions against U.S.-led forces in 2004, could lead to a dramatic increase in violence in Iraq, threatening the security gains since President Bush ordered nearly 30,000 U.S. reinforcements to Iraq early last year.

Nevertheless, al-Sadr appears increasingly isolated politically, as major Sunni, Shiite and Kurdish parties have rallied behind al-Maliki in his showdown with the militias.

Even Iran's ambassador to Baghdad has thrown his support behind the crackdown against "lawbreakers" in Basra, while deploring U.S. military operations against the Shiite militants in Sadr City.

Rice told reporters she sees signs that the campaign has brought sectarian and ethnic groups together in an unprecedented way, and she said she wants to capitalize on it.

She said al-Maliki's government "has made a choice to pursue militias and is willing to bear the consequences."

That broad support - especially from the Iranians - may have accounted for the ease with which Iraqi soldiers entered the last Mahdi Army stronghold in Basra this weekend. Last month Iraqi soldiers faced fierce resistance in the Hayaniyah district, but on Sunday officials declared the area under government control.

Iraq soldiers were seen Sunday setting up bases and checkpoints to establish a permanent security presence. Lt. Gen. Ali Ghaidan, a commander of the operation, said troops had recovered large caches of weapons during door-to-door searches.

Al-Sadr's followers believe the campaign is aimed at weakening their movement to prevent it from winning provincial council seats at the expense of Shiite parties that work with the United States in the national government.

However, the U.S. military insists the campaign is not aimed at the mainstream Sadrist movement but against criminals and Iranian-backed splinter groups.

"We've made it very clear that the Mahdi Army itself ... is not the enemy," said Maj. Gen. Rick Lynch, commander of the 3rd Infantry Division, which controls a large region south of the capital. "The enemy is Sunni extremists, Shiite extremists and Iranian influence."