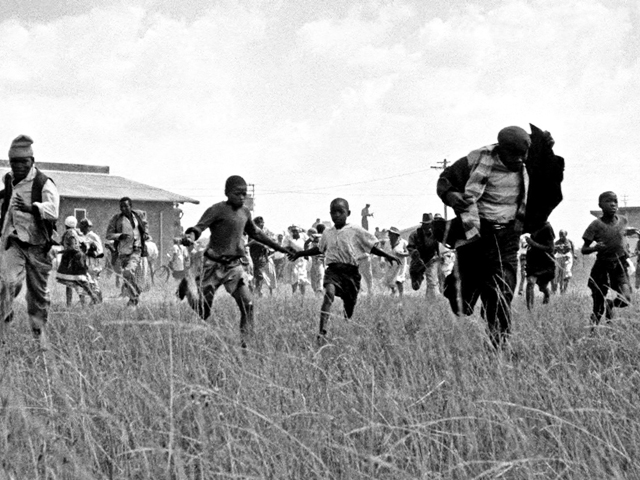 SHARPEVILLE, South Africa -- Every month, Esme Maysiels honors the father she never knew by tending his grave. She was born just two months after he was killed at a protest against apartheid.

"I don't think it would have been noble of him to remain at home," Maysiels says when asked why her father went to the protest, adding she is proud of her father "to this day, to this moment."

On March 21, 1960, Zaccheus Maysiels joined 3,000 other black South Africans to protest one of the most hated restrictions against the nation's black majority: passbooks, which controlled their every movement.

"Even if you had a visitor in your house," remembers Lydia Mahabuke, "you have to report them to the police station. They will tell you how long your visitor can stay."

Sharpeville's residents gathered peacefully in front of the police station without those passbooks. Their objective: to be arrested.

But police opened fire, shooting protesters in the back as they ran for their lives.

Abram Mofokeng still has a bullet lodged in his spine.

"We were all in fear," he says. "There was no time to think. We were just trying to escape."

Johannes Sefatsa's brother was shot in the back as he ran for his life.

"In the morning, when I looked at his bed, his empty bed, he was not there, it was then that I started crying," she says.

Police hauled away the bodies. The government feared a funeral procession of 69 hearses would spark unrest, so the caskets arrived in the beds of trucks.

"The coffins arrived closed," Esme Maysiels says. "They never got to give us a chance to have a last glimpse of those people."

But they did not die in vain. Few knew in the days after the massacre the outrage it sparked worldwide, and the calls of condemnation against South Africa's racist regime.

The Sharpeville massacre also touched off three decades of protest in South Africa, ultimately leading to freedom for Nelson Mandela, who had spent 27 years in prison. He became South Africa's first black president in 1994 and signed the nation's new constitution in Sharpeville.

Esme Maysiels may have never known her father, but she does know his sacrifice paved the way to freedom for her daughter's generation.

Asked how her children can make her as proud as her father made her, Maysiels says, "Wherever they can make their mark, can make a change. And they can give to the people the best that they can be."

Progress of any kind.