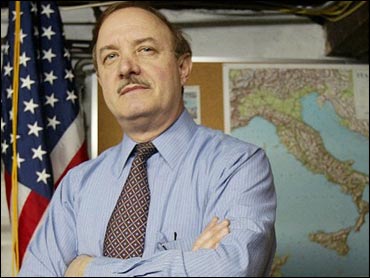 Be careful what you fish for! warns the slogan for DreamWorks' new animated adventure, "Shark Tale," set to hit the theaters this October.

The movie studio's already reeling in more than it bargained for, with advance reaction from an Italian-American group upset at the movie's use of stereotyped images of Italians as gangsters.

DreamWorks spokeswoman Terry Press said the movie "is about family and telling the truth and the cost of telling a lie."

"You wish they would wait until they'd seen the movie before attacking it," she added.

With an October release date, the movie is not yet finished. The Italic Institute hasn't even seen the script, and there is no trailer so far.

The web site (SharkTale.com) is up, however, and John Mancini of the Italic Institute of America (italic.org) isn't happy at the fact that some of the film's villains have Italian-sounding names and accents.

The Italic Institute of America - of which Mancini is a founder - speaks out on various issues including what it calls Hollywood's stereotyping of Italians as dumb thugs or murderous gangsters.

"We're concerned about what preteens are learning from the outside world," said Mancini, 56, a Long Island real estate manager. "They don't associate other groups as criminals, they only know Italians as gangsters. Our goal here is to de-Italianize it."

Mancini said his complaint with "Shark Tale" is that it could unfairly make children equate an Italian surname with murder and crime.

"Shark Tale," which is computer-animated like the DreamWorks hit "Shrek," features some fearsome undersea creatures running a watery underworld.

One, a shark named Lino, is voiced by Robert De Niro. Will Smith is the voice of Oscar, a small fish who tells a tall tale about "whacking" a shark gangster who was actually taken out accidentally by a ship's anchor, drawing the attention of undersea villains bent on revenge.

Movie fans won't have much trouble picking out the various stars - in the tradition of high-end cartoons - each fish and shark has been drawn to eerily resemble the actor voicing the role.

Mancini claims one victory while swimming against "Shark Tale's" tide: after his group lobbied DreamWorks, the name of an aging shark gangster (voiced by Peter Falk) was changed from Don Brizzi to Don Feinberg.

Probably not an inconvenience to Falk, who - despite his fame as the TV detective Columbo - happens to be Jewish, not Italian.

Switching one gangster from Italian to Jewish isn't enough for Mancini.

"We want character names identified as Italian dropped, the mannerisms, the forms of speech should be dropped," he said. "If they choose to make them Jewish or Rastafarians, we don't like that either, but our bag is Italians."

DreamWorks is unlikely to give in - in part because the movie is a parody of such films as "The Godfather" and TV shows like "The Sopranos."

"The foundation of comedy is poking fun at stereotypes," Press said. "I don't care if you're talking about Chris Rock, Mel Brooks... that's what comedy does. We didn't create those stereotypes."

"Shark Tale" is the latest battle in a long war by the Italic Institute over the portrayal of Italian-Americans in the movies. The group says there have been at least 1,233 films related to Italians since 1928, and about 31 percent show the culture in a positive light, while 69 percent are negative.

Although most actors feel the issue is overblown, even some Italian-American actors, like John Turturro, acknowledge that the gangster goombah stereotype can get tiresome.

"Over the years, I don't do those parts," reflected Turturro, in a recent interview with The Associated Press. "Once you've done it, you've done it. Isn't there any other part I could do?"

"Instead of protesting things, people should go out and, you know, try to tell a story that you want to tell. I've done that, but it's been very difficult," said Turturro, citing his 1992 film "Mac," the story of a 1950s construction contractor inspired by his father's life. "With 'Mac,' it was hard to do. Nobody wanted to do it because they weren't criminals. That really makes you feel terrible."

Vincent Pastore, better known as Big Pussy from "The Sopranos," said he would never criticize the program that made him famous, but he also doesn't want to be known only as a wiseguy actor.

"If I'm walking down the street, people can call me Pussy any time they want. That doesn't bother me. What bothers me is when I go try to get a job in Hollywood and they say, 'Oh, it's Big Pussy.' What I need to do is get back into the theater and let people come and see me in the audience playing other characters."

Still, Pastore pointed out that a lot more Italian-Americans love mafia movies than disdain them. He said he's thrilled to play a gangster octopus in "Shark Tale."

For now, Mancini's following is still relatively small - about 1,000 members across the country, he says. He formed the group in 1987.

His group is not alone: In 2002, the Columbus Citizens Foundation, which runs the New York City Columbus Day parade, tried to block Mayor Michael Bloomberg from attending the annual celebration of Italian pride alongside Dominic Chianese and Lorraine Bracco of "The Sopranos."

Bloomberg eventually balked at attending, and celebrated the day by having lunch with the actors.

Ken Wlaschin, a historian with the American Film Institute, said almost all ethnic groups could complain about stereotypes. The popularity of Italian gangsters has more to do with the fame of real-life Mafia figures, he said.

The Italic Institute says its study shows 40 percent of the Italian-themed movies feature mobster characters - while the actual percentage of Italian Americans who are criminals is much, much lower.

Of those mob movies, 12 percent feature real-life figures like Al Capone, while 88 percent are made-up, like Don Corleone from "The Godfather" or Paul Vitti from "Analyze This."

Robert De Niro has portrayed all three of those crooks. In a 2002 press conference to promote the sequel "Analyze That," he downplayed the concerns of those who objected to Italian gangster stereotypes.

"That's part of our culture, and there certain things that are there, and you have to accept them, acknowledge them, make fun of them. And we all know what it is, you don't have to make more of it and take an issue and a stance like that. I think that's foolhardy. Well, not foolhardy, but not necessary," De Niro said.

De Niro did not respond to questions about the "Shark Tale" complaints, and Falk's assistant said he had nothing to do with his character's ethnicity change.

Mancini said De Niro and other Italian actors and filmmakers who work on gangster films betray their own heritage.

"There's a lot wrong with Italian Americans," he said. "We're the cause of a lot of our own problems."