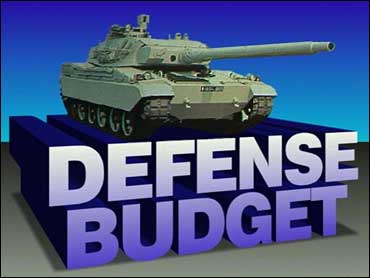 In the biggest U.S. military buildup since the Reagan era, President Bush will press Congress on Monday to raise defense spending by $120 billion over the next five years to $451 billion by 2007, senior U.S. officials told reporters.

The were confirming a story in The New York Times, which cited Pentagon documents it had seen. The Associated Press obtained the same documents.

The Times says the projected 30 percent rise in defense spending through 2007 would establish a pace only slightly slower than President Reagan’s hikes from 1981-1985, the largest ever during peacetime.

Mr. Bush will reportedly also propose $591 billion in tax cuts over the next decade, even as he battles projected overall red ink.

Proposed increases over the current $331 billion Pentagon budget would begin with a jump to $379 billion in the coming 2003 fiscal year beginning next Oct. 1 and steadily rise in the following four years, the officials told Reuters.

That proposed increase of 12 per cent after inflation would be the biggest percentage boost in the military budget since Mr. Reagan began his buildup.

Next year's increase would be part of Mr. Bush's proposed $2.1 trillion overall federal budget for 2003, to be formally sent to Congress on Monday.

The officials, who asked not to be identified, said they expected lawmakers to approve next year's 12 per cent budget increase despite major controversy over Mr. Bush's costly plan to build a missile defense system for the United States.

“I think it would be hard to dismiss a very large increase after September,” said one of the officials referring to the devastating Sept. 11 terror attacks.

Indeed, with a war against terror under way and troops in Afghanistan, lawmakers of both
parties are thought sure to support healthy defense increases this year, even as deficits return, analysts say.

Mr. Bush and members of Congress have agreed that the world's only superpower military must gird with new arms, technologies and strategies to fight “terrorists” such as the anti-Western al-Qaida network, blamed by Washington for the attacks.

Mr. Bush and administration officials have said defense, domestic security and the economy will be the spending plan's top three priorities, with many other programs enduring cuts or much smaller rates of growth.

“The budget fulfills President Bush's pledge to win the war against terrorism, defend America and its people, improve quality of life for our men and women in uniform and accelerate a bold transformation of the U.S. military to counter 21st century threats,” one document says.

Even so, some congressional officials have privately criticized Mr. Bush's proposed increase as providing less than the numbers would make it appear.

They say that after taking into accout inflation, improvements to the ailing military health-care system and a $10 billion contingency fund that Bush is proposing to cover military operations, little is left to strengthen war-fighting capabilities.

Mr. Bush has already announced that he plans to call for an increase to $379 billion next year to arm and prepare the U.S. military for war against both “terrorist” guerrillas and nations in the years ahead.

The U.S.-led war in Afghanistan, which has toppled that country's ruling hard-line Islamist Taliban movement and battered the Afghan-based al Qaeda, is already costing Washington more than $1 billion a month.

Much of the 2003 defense budget to be sent to the legislature on Monday would cover better troop pay and benefits.

But officials said it would also devote $29 billion to the war on terrorism and $9 billion to unconventional arms ranging from pilotless spy planes carrying missiles to a laser communications system for troops.

The budget would re-supply the Air Force with thousands of satellite-guided bombs used in Afghanistan and convert four big Cold War submarines built to fire long-range nuclear missiles to instead launch dozens of conventional cruise missiles.

Mr. Bush's budget includes $7.8 billion for missile defense, a figure unchanged from the current year. But critics of the testing program to shoot down missiles from “rogue” states are concerned over a Congressional Budget Office estimate this week that it could cost $238 billion over the next 15-25 years.

Separately, documents documents obtained Saturday by The Associated Press showed the President's new budget will propose $591 billion in tax cuts over the next decade, even as he battles to turn federal deficits back into surpluses.

Though a new round of tax reductions is not a major White House priority this year, the numbers show those cuts would claim a large share of dwindling federal surpluses.

The documents show that Bush's $2.13 trillion budget for next year will draw upon savings from Medicaid and a health-insurance program for low-income children. It also
will propose raising money by leasing mineral drilling rights in Alaska's Arctic National Wildlife Refuge, which Congress blocked last year.

While shedding little light on specifics, the documents confirm the crunch many programs face next year in Bush's plan to contain a deficit he projects at $80 billion.

The figures show that spending for all programs except automatically paid benefits would grow from $688 billion this year to $746 billion next year, or 9 percent. But while spending for defense and domestic security will skyrocket, spending for everything else will grow by just 2 percent, from $348 billion to $355 billion.

"By curtailing unsuccessful programs and moderating the growth of spending in the rest of the government, we can well afford to fight terrorism, take action to restore economic growth, and offer substantial increases" for some eduction, environment, health and science programs, Bush says in a message accompanying the budget.