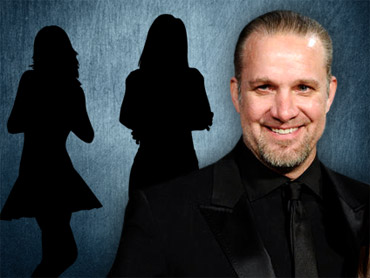 According to court documents obtained by E! Online, the Monster Garage star, who is nicknamed the "Vanilla Gorilla," was accused of sexual harassment and sexual battery by a former employee in his famed motorcycle shop.

In a complaint filed in 2000, Deann McClung claimed she was harassed on a "regular basis" and was eventually fired for bringing it up.

The documents say James employed her from April 1999 to Jan. 19, 2000 and claim she was forced to endure "pornography in the workplace," "lewd glances," "sexual comments," "degrading comments," "sexual propositions," and the "exposing of his sexual organ."

McClung also claimed James touched her without consent and said she was forced to put up with behavior that was "offensive to any reasonable woman."
On May 3, 2001 the case was dismissed by attorneys for both sides.

The court documents are here (PDF).

It may not be James' only harassment case. According to TMZ, James paid $725,000 to a former high level employee in 2007 to settle a sexual harassment suit. The woman, TMZ claims, was represented by television-friendly attorney Gloria Alred, who now claims she is representing a possible fourth mistress tied to James.

James recent bout of troubles began two weeks ago, when Michelle "Bombshell" McGee, a California-based tattoo fetish model and stripper told In Touch Weekly she had an 11-month affair with James, in part while Bullock was shooting her Oscar-winning role in "The Blind Side."

Soon after, more alleged mistresses came out. Melissa Smith, a tattooed stripper, told Star Magazine, she slept with James and Brigitte Daguerre, a Los Angeles-based photographer and fetish model was tied to James by TMZ.