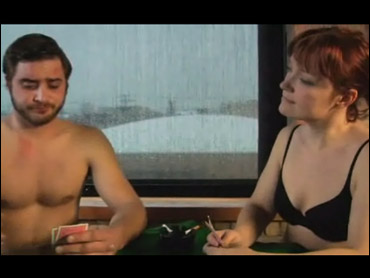 If the name doesn't grab your attention, the opening montage will.

But this isn't pornography; it's a provocative podcast that shoves sex-ed into the 21st century, starring a PTA mom with a past, CBS News correspondent Cynthia Bowers reports.

Hasler talks matter-of-factly about things that make most parents cringe, such as birth control, first-time sex, and dating.

"If you are in junior high and you are dating someone out of high school, he's a pedophile, and pedophilia is a disease," Hasler says in one show.

The mother of three from Waukesha, Wisc., says she's able to do because she learned sex-ed the hard way -- when she got pregnant at 18 after a one-night-stand.

"One birth control method we don't recommend is the 'pull and pray.' That's the reason I have two of my three kids," Hasler said.

That kind of brutal honesty has made the Midwest Teen Sex Show one of the most popular health podcasts on the Web - with more than 60,000 subscribers tuning into to the twice-monthly episodes.

Hasler says: "We're encouraging both boys and girls to be responsible for having safe sex. And we're also telling them that they don't necessarily have to have sex at all."

A scene from one episode involves a girl telling her mom: "There's something I've been wanting to tell you."

"Oh, my god. You're pregnant," the mother replies.

Filmed on a shoestring, the show is the brainchild of Hasler's high school classmate, aspiring filmmaker Guy Clark.

"We're presenting it in a way that maybe it's not such a big deal," Clark, the show's director, said. "It's okay to be curious about it; it's actually kinda funny."

Sex educator Erika Pluhar says there's a place for this "in your face" approach to teenage sexuality.

"A lot of parents have difficulty having these dialogues with kids," Pluhar said. "I would want them to be dialogue starters, rather than stop, period, end of sentence."

One group of Chicago-area teens gave the show a big thumbs up.

"I was impressed at how honest it was," said high school senior Jack Dengel. "I mean, they were explaining, they weren't preaching."

Creators say their ideas come from viewers themselves: teens with age old questions, getting answers in a whole new way.