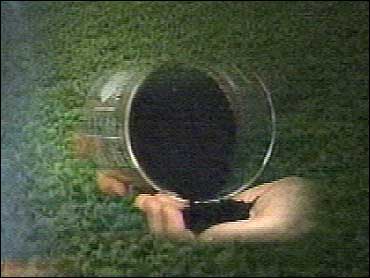 When Danny Pennock, a healthy 17-year-old, grew critically ill with a mysterious staph infection both his parents and his doctors were at a loss.

"I knew. I knew right away the day I took him into the hospital. I knew he wasn't coming home. I just knew it," said Danny's mother, Antoinette Pennock.

Eight years later, the Pennocks say they believe what killed their son came from the farmer's field across the street.

"The sludge that was put on this property over here," Antoinette said.

Class B sludge is a powerful agricultural fertilizer that includes treated sewage and human waste.

It's perfectly legal, but the Pennocks are among the growing numbers who believe it is lethal, too.

"It's like a toxic soup," said Russell Pennock, Danny's father.

And did he believe the sludge killed his son?

The use of sewage sludge has been in practice for years. The government promotes it as not only safe, but a huge improvement over the old system of dumping raw sewage into rivers and the ocean.

"I think we've been using it for about 10 years," said David Taliaferro.

The Virginia farmer says treated sludge boosts crop production, saves him money because farmers get it for free, and is backed by the government.

"I am operating on the assumption that the government is doing its job and that the product that I have is a safe product to use," said Taliaferro.

The EPA Deputy Administrator says the government has new questions and is now reexamining the use of treated sludge.

"At this point the agency has taken the position that the material is safe, but because there's significant uncertainty about that, we've got to revisit that question," Gilman said. "There's no doubt we have to be more sure about this than we are today."

At thousands of sewage treatment plants across the country separating the waste from the water is how sludge -- also called "biosolids"-- is created. For industry executive Bill Toffey there's absolutely no doubt about its safety.

"I have no concern with holding this in my hand," Toffey said. "We have not known of any situation where disease has been transmitted in biosolids."

The EPA will issue a new report on sludge early next year. Meanwhile some local governments are trying to ban it. And the Pennocks?

They're suing the state of Pennsylvania, the farmer across the street and the local sewage plant -- a crusade they say could save lives.