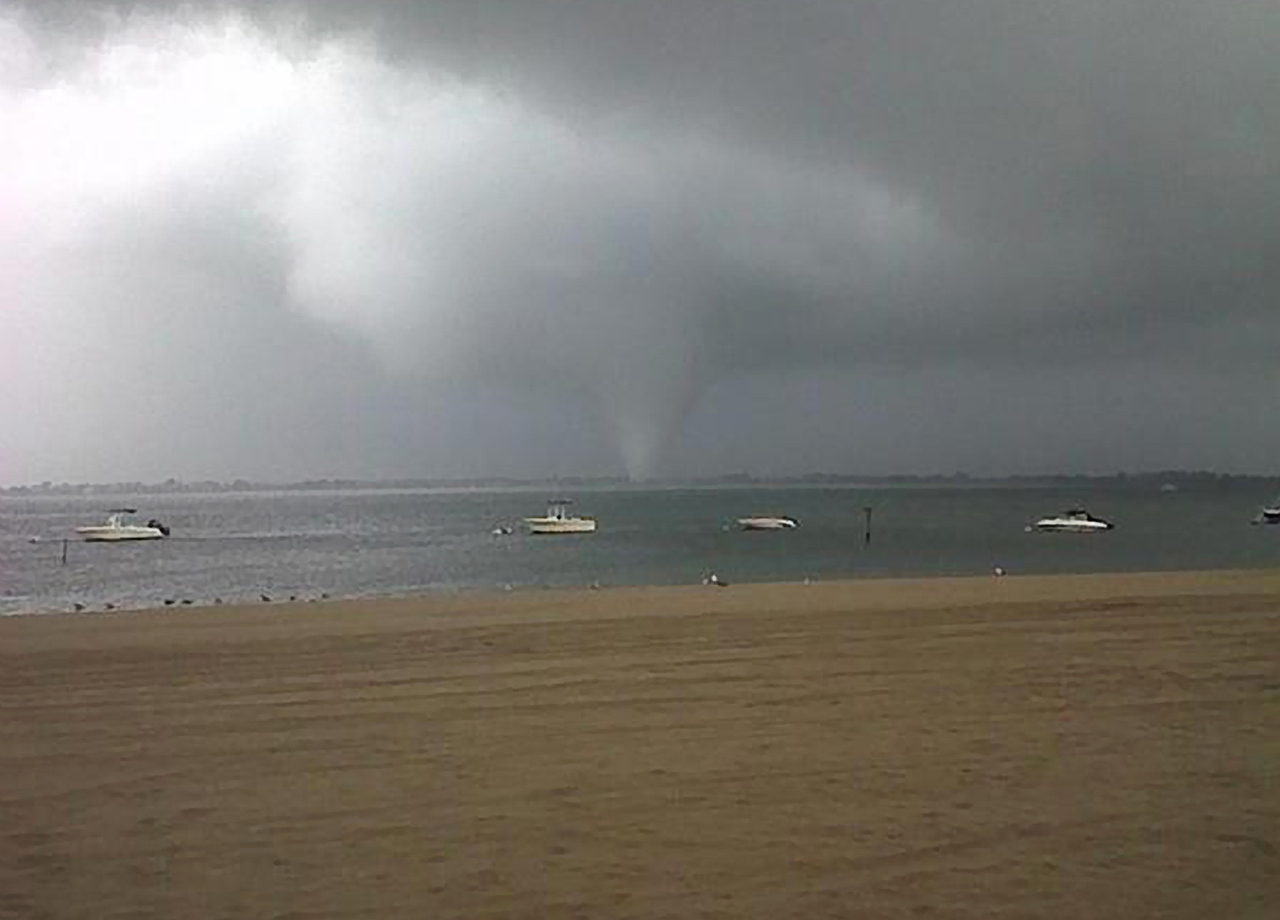 (CBS/AP) The National Weather Service has confirmed that a tornado struck a beachfront neighborhood in New York City.

Videos taken by bystanders show the funnel cloud hurling sand and debris in the air as it moves through the Breezy Point section of the Rockaway peninsula in Queens on Saturday. A New York Fire Department spokesman said there were power lines down and possibly other damage.

There are no reports of injuries.

Radar data, video and witness reports confirmed that the cyclone that hit New York City was a tornado, National Weather Service meteorologist Dan Hofmann said. He said an inspection team would assess the damage and before estimating the strength of the storm. Hofmann said some witnesses were reporting that the wind had been strong enough to lift cars off the pavement.

The National Oceanic and Atmospheric Administration (NOAA) confirmed that a funnel cloud was also sighted in Chantilly, Va., and a second possible funnel cloud has been sighted in Forestville, Md.

The utility Dominion reports more than 100,000 customers are without power in Virginia.

The NWS has issued a public severe weather advisory for much of the Northeastern United States for Saturday afternoon and evening.

The advisory said significant severe thunderstorms, including the development of widespread damaging winds and a few tornadoes, are expected across portions of the lower Great Lakes, New England and Mid-Atlantic States Saturday afternoon into tonight.

The strong upper-level weather system will interact with a moist and unstable airmass as it moves into the northeastern U.S.

Video taken by Roy Currlin shows a funnel cloud coming ashore at Breezy Point in Queens. Click on the video player below.

"It was crazy," said neighborhood resident Joseph Mure, who was in the shower when the storm hit, and went outside to snap a picture of the retreating funnel. "There were a lot of sirens going off. You could see it twisting."

Another video posted on YouTube by gerritsenbeach (click on the player below) shows what appears to be a funnel cloud at Breezy Point.

"A lot of rain, a lot of wind," he said. "It picked up picnic benches. It picked up Dumpsters."

Half an hour later the weather was beautiful, but he's had to close the club to clean up the damage.

Lizann Maher, a worker at Kennedy's Restaurant at the edge of Jamaica Bay, said she saw a "swirling cone kind of thing with something flying in it" come down and then head back out into the water toward Brooklyn.

"It was scary. We have all glass so we kept saying, 'Get away from the glass!' just in case it did come back around," she said.

The tornado struck as part of a line of storms that were expected to bring damaging winds, hail, heavy rain and possibly more tornadoes throughout the mid-Atlantic and Northeast on Saturday. Across New York state, in Buffalo, strong winds from a broad front of thunderstorms blew roofing off of some buildings and sent bricks falling into the street.

The storm system killed four people, including a child, in Oklahoma on Friday.

4, including infant, killed in Okla. storms

Severe storms are also possible from the Northeastern United States into the Carolinas.

Damaging wind gusts will be common across the moderate risk area, and some locations could receive wind gusts of over 70 mph.

State and local emergency managers are monitoring this developing situation. Those in the threatened area are urged to review severe weather safety rules and to listen to radio, TV and NOAA weather radio for possible watches and warnings.