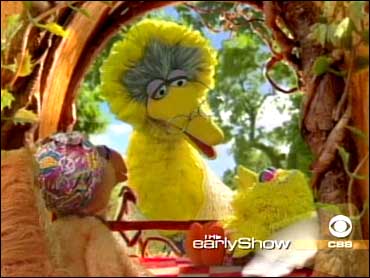 "Puppet regimes" are back in the Middle East. Once again, they're promoting peace, diversity and the importance of brushing your teeth.

New episodes of "Sesame Street" are going on TV in Israel and the Palestinian territories, producers said Sunday, years after the original versions signed off because of a lack of funds.

As with the popular U.S. program designed to enhance basic educational content for youngsters producers tailored the Mideast casts and story lines to the fit the audiences.

"Rechov Sumsum," the Israeli version, features a Muppet of Arab origin for the first time. Arab puppets have been used in other versions of the show elsewhere around the world.

New human actors on the Israeli version include Jewish immigrants from Russia and Ethiopia, communities that have faced ill treatment from some veteran Israelis.

The Palestinian counterpart, "Shara'a Simsim," seeks to offer positive role models to boys in the West Bank and Gaza Strip.

"It's really about respect and tolerance," said Gary Knell, president of Sesame Workshop, the New York-based nonprofit group behind Sesame Street programming worldwide. "We know that television teaches — the question is, 'What does it teach?' "

Knell said the goal is to counter negative influence of society, because children as young as 3 can begin to demonstrate prejudice.

"They're not born with this," he said. "They're learning it from their parents, from the community, from friends."

In coordination with the re-launching of the shows, officials announced the distribution of Muppet-themed educational kits to children throughout Israel, Gaza and the West Bank.

"It opens up a new way to deal with issues of conflict," Yuli Tamir, Israel's minister of education, said at a ceremony in a Jerusalem kindergarten. "Just teaching children how to live together, how to work together with each other despite their differences."

The ceremony followed more than a week of meetings Knell had with top political figures in the region, seeking funding and support for local Sesame Street productions.

"There's a desire of the political leaders to change the endless debate that seems to be passed down from generation to generation," he said.

Tensions have long existed between Israel's Jewish and Arab communities. Arabs make up about one-fifth the country's population and, while officially equal with Jewish residents, have long complained of treatment as second-class citizens.

Launched in the United States in the late 1960s, Sesame Street currently is shown in more than 120 countries, Knell said.

The Israeli version enjoyed wide success when first aired in the early 1980s. A lack of funds stopped production of new episodes for more than a decade, but producers relaunched the show last winter.