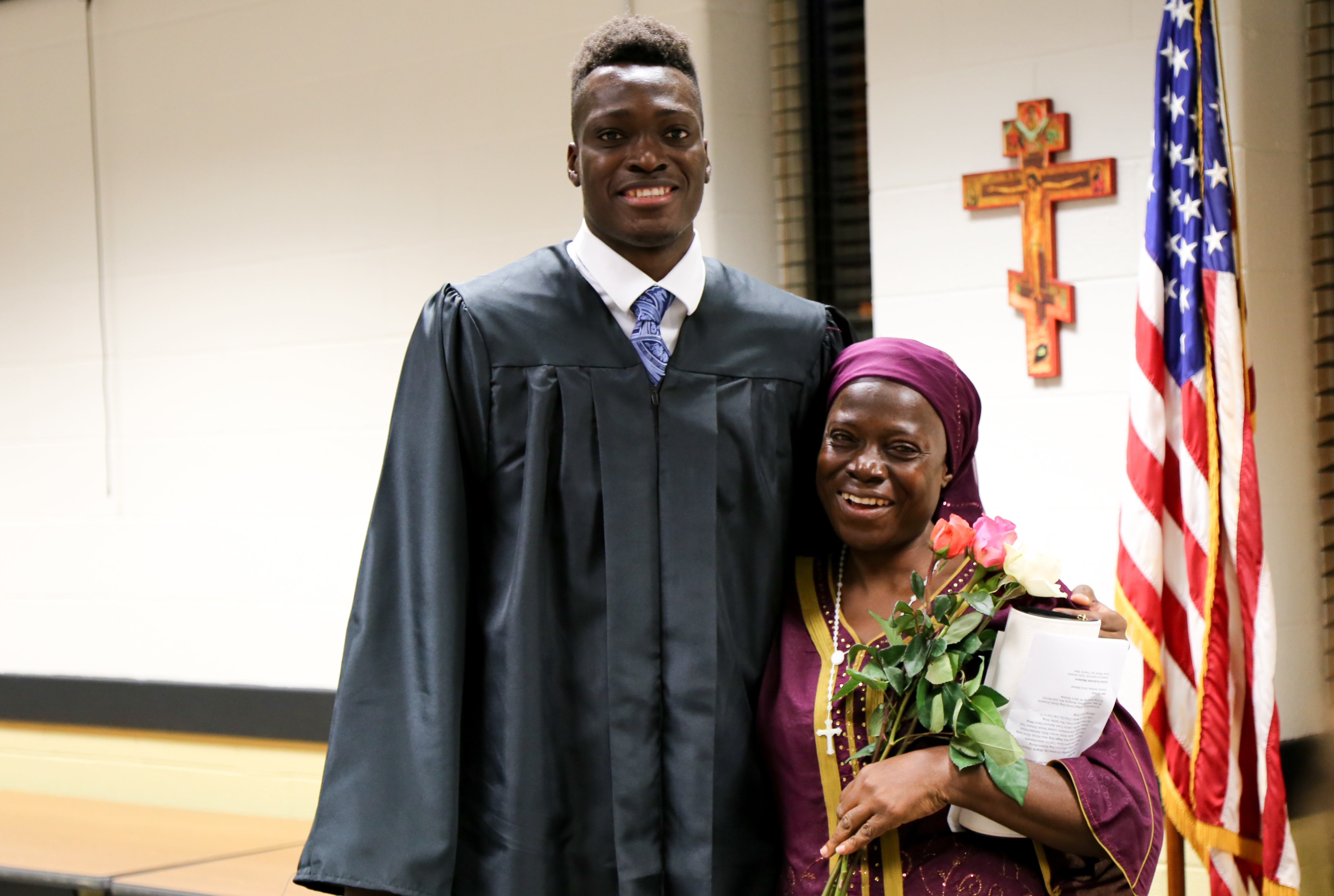 In early March, the senior class at the John Carroll School was on its way to North East, Maryland for their class retreat. A teacher stood up on the bus and asked students to hand in their contributions for the Senior Lunch.

Mike Tertsea threw a few dollars into a Ziploc bag.

Later he would come to find out the money wasn't for lunch at all. It was for him.

Tertsea is 6 feet 10 inches tall. At 14 years old, he left home in Benue State, Nigeria, after he got the opportunity to attend school and play basketball as an international student at the John Carroll School. That was four years ago. And he hasn't been home to see his mother since.

On Saturday, Mike graduated. He walked across a stage built on the school's football field to excited cheers from the senior class. And up in the stands, waving at him, sat his mother, Felicia Ikpum.

The "lunch money" brought her there. Tertsea's classmates raised enough to bring Ikpum to his graduation.

"I'm the tallest, so, I saw her standing there [at graduation] and recognized her immediately," he said. "It was great to have her there to see me move onto the next level, which is college."

It all started when Senior Kishan Patel wrote an article about Tertsea in the student newspaper in February. He shared the article in a group chat with his class. The article mentioned that Tertsea and his mom struggled with necessities like food and electricity in their village in Nigeria. Immediately his John Carroll peers knew they wanted to do something for Tertsea.

"Everyone was having all these ideas, " Patel said, "Let's do this for him, let's do that for him."

Because the article mentioned Tertsea had not seen his mother since leaving Nigeria, the class settled on a goal of trying to bring her to Tertsea's graduation.

They raised $1,600 on their bus ride to Senior retreat and a faculty member went to work on a visa for Tertsea's mother. The class came up a little short in the end, but within an hour after faculty were notified of the shortage, the extra money was raised.

When a ticket, a visa and accommodations were secured, Ikpum traveled hours, almost giving up at times, to Lagos, and then boarded her first airplane.

Tertsea saw her for the first time at Baltimore Washington International Airport last Friday and couldn't contain his excitement. But he said his mother barely recognized him, he had grown so much.

Ikpum was able to attend a week of graduation activities and Tertsea also plans to take her to see the monuments in Washington, D.C.

Patel, who is also student government president, said making this happen for Tertsea is just one example of the generous spirit of the Class of 2016.

"I think it defines our class really, " he said, "it's a testament to our unity."

At the same time, he credits the outpouring of support from faculty and administrators. John Carroll is the kind of community where this can happen, Patel said, and it's a place he'll miss dearly.

Editor's Note: Reporter Jillian Hughes is an alumna of the John Carroll School.