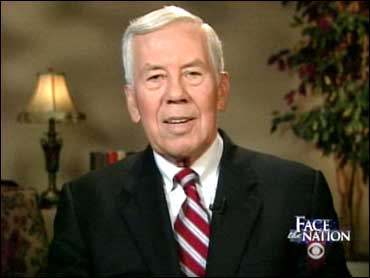 A leading Republican senator suggested Sunday that the Bush administration should talk directly with North Korea as concerns grow over a possible test launch of a missile that could reach the United States.

On CBS' Face The Nation, Sen. Richard Lugar, chairman of the Senate Foreign Relations Committee, said the U.S. should not attack the missile while it is on the ground, before it is fired, as some have urged.

"It would be advisable to bring about a much greater degree of diplomacy, and this may involve direct talks between the United States and North Korea," he told Bob Schieffer.

North Korea long has wanted direct meetings with the U.S. Washington, however, has refused, insisting it will only meet the North Koreas in the context of six-nation international talks aimed at ridding the communist country of its nuclear weapons program.

Lugar, R-Ind., said he respected those talks, which are stalled now, but "nevertheless, with regard to a missile that might have a range of the United States, that becomes a very specific United States-North Korean issue."

"We're going to have to come to a point where we find at least an agenda to talk with North Korea about, and I think we are moving toward that," Lugar said on CBS.

Sen. Barbara Boxer – who also appeared on Face The Nation – said no options should be taken off the table, but urged the president to continue with multi-party talks.

"The kind of diplomacy that we engaged in at first was very tentative, got stronger, got better, got wiser," the California Democrat said. "I say you never take any option off the table, but I think if we can continue to get those countries that North Korea listens to, to keep up the pressure – that is Russia, that is China – we could avoid a serious escalation of this whole matter."

Intelligence reports say fuel tanks have been seen around a missile at North Korea's launch site on the northeastern coast. But officials say it is difficult to determine from satellite photos if the rocket is actually being fueled.

The potential test is believed to be of a Taepodong-2 missile, which the U.S. government estimates has a range of between 5,000 miles and 7,500 miles.

There has been speculation that the United States might use its fledgling missile defense system to shoot down an incoming missile if it is fired.

Sen. John Warner, the chairman of the Senate Armed Services Committee, said Sunday that he had been speaking with the White House, "and, frankly, we don't know exactly what the status is, whether it's been fully refueled or what the problem is.

"The weather is closing in now, which would not make it an optimal time to try and test it," Warner, R-Va., told "Fox News Sunday."

When asked if U.S. missile defenses had been put on alert, Warner said such defenses "will be utilized to the extent they can."