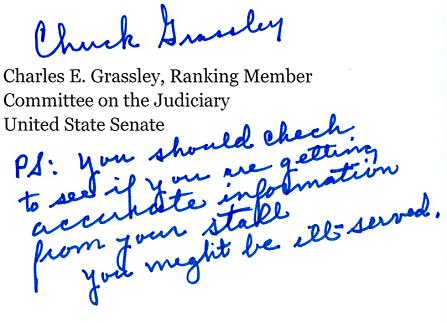 A strongly-worded letter from Republican oversight members of Congress to Attorney General Eric Holder today came with an unusual handwritten notation at the bottom. Penned in blue ink by his signature, Sen. Charles Grassley's (R-Iowa) writes: "PS: You should check to see if you are getting accurate information from your staff. You might be ill-served." (Scroll down to read Grassley's letter to Holder)

The letter to Holder from Grassley and Rep. Darrell Issa (R-CA) accuses Holder's Justice Department of sending a letter "containing false statements" regarding the initial inquiries into ATF's gunwalker scandal.

In a Feb. 4, 2011 letter to Sen. Grassley, the Justice Dept. had claimed whistleblower allegations were "false" and that "ATF makes every effort to interdict weapons that have been purchased illegally and prevent their transport to Mexico." The Justice Dept. appeared to stand by those statements in a separate letter to Grassley yesterday stating: "It remains our understanding that ATF's Operation Fast and Furious did not knowingly permit straw buyers to take guns into Mexico."

"(W)e were surprised and disappointed to see the Department repeat once again, in slightly different language, its denial..." reads the Grassley/Issa letter to Holder, sent today. "When questioned in transcribed interviews last week in Phoenix, agents with first-hand knowledge of ATF operations contradicted that claim."

Sources tell CBS News the Congressional investigators spoke to four current ATF agents, including whistleblower John Dodson who told his story to CBS News on March 3. They attempted to question ATF Group Supervisor David Voth, who oversaw the operation called "Fast and Furious" that's at the center of the controversy, but sources say Voth refused to speak to them.

When we contacted the Justice Department today for their response to today's letter from Grassley and Issa, a spokesman said the Holder has made it clear that the Department is taking the gunwalking allegations seriously, and that's why he has referred them to the Inspector General for investigation

Holder is expected to appear before a Senate Judiciary Committee hearing tomorrow. Grassley is lead Republican on the committee.