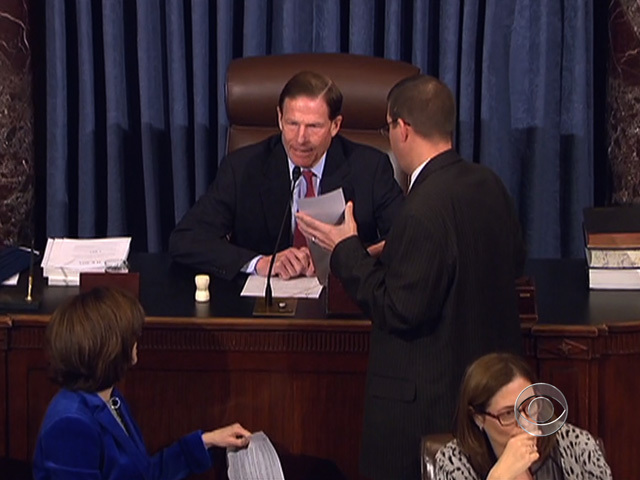 It's a deal, but don't get too happy about it yet. That's the word from some Republicans on a possible agreement to extend the payroll tax cut. While the Senate Saturday did give a final thumbs up on a $1-trillion bill to keep the government running through next summer, the payroll tax deal faces another fight and soon. CBS News correspondent Nancy Cordes has the latest.

With the holiday fast approaching, Senate leaders set aside their differences -- to a point -- and crafted a deal that will extend the payroll tax cut, but just for the next two months.

In a rare Saturday session, the Senate voted overwhelmingly to keep payroll taxes at 4.2 percent, down from the traditional 6.2 percent.

"We stayed in session to present some issues to the American public that were extremely important," said Democratic Senate Majority Leader Harry Reid.

They also voted to continue to give long-term jobless Americans 99 weeks of unemployment benefits.

But because negotiators could not agree on how to pay the $190 billion price tag, they decided only to extend the tax cut and expanded unemployment benefits for two months -- meaning they'll be fighting about this all over again when they return in January

But Saturday afternoon, President Obama said he is confident a longer extension will pass.

"It should be a formality and hopefully it's done with as little drama as possible," he said.

Republicans extracted a big concession from Democrats in exchange for their support on continued unemployment benefits. The bill requires the administration to speed up a decision on the Keystone XL oil pipeline -- a decision the president wanted to delay until 2013.

"Here's an opportunity for the president to say he's not going to let a few radical environmentalists stand in the way of a project that will create thousands of jobs, and make America more secure at the same time," said Republican Senate Minority Leader Mitch McConnell.

The bill now goes to the House, and CBS News is hearing Saturday night that a large number of House Republicans are upset about the deal. They don't like the fact that the payroll tax cut was only extended for two months as they feel it creates too much uncertainty for the middle-class tax payer. CBS News is told they are trying to figure out their next move.