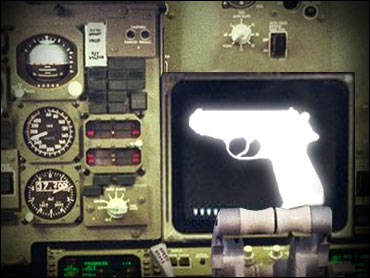 The Senate overwhelmingly backed a measure Thursday that would arm airline pilots on a voluntary basis in a dramatic security step aimed at preventing a repeat of last year's Sept. 11 attacks.

Gun control advocates from the Democratic party joined conservative Republicans in passing the measure 87-6, leading supporters to declare they had the momentum to overcome the remaining hurdles to making the plan law.

A similar bill already has passed the House by a wide margin, and while the Bush administration does not like the idea it said Thursday it would implement such a plan if Congress passes one.

"This is a package that will make our skies safer," declared Sen. Barbara Boxer, a California Democrat and co-sponsor of the bill along with Sen. Bob Smith, a New Hampshire Republican.

Allowing qualified pilots to carry guns in the cockpit would give them the "means to mount an effective last-ditch effort against terrorism and hijackers," Boxer said.

"This is not a cowboy idea," Montana Republican Sen. Conrad Burns, another co-sponsor, said at a news conference outside the Capitol before the debate.

"Those who want them and can use them and understand them should have the right to carry weapons," Burns said. "I never got a lot done using a broomstick. You've got to have something that's lethal."

In the Sept. 11 attacks on Washington and New York, four commercial airliners were commandeered by hijackers with knives who stormed the cockpits and took control of the planes.

Unlike the House bill, the Senate bill also would provide self-defense training for flight attendants. Several dozen of them rallied outside the Capitol Thursday to back the measure.

The Bush administration had been flatly opposed to arming pilots, but on the eve of Thursday's debate it signaled that it would consider arming a limited number of pilots.

As Thursday's debate was underway, transportation officials released a letter outlining all the complications with arming pilots, but said the administration was willing to work with Congress to implement such a plan if it became law.

James Loy, director of the Transportation Security Administration, said it would cost the government up to $900 million to establish the program to train about 85,000 pilots in weapons use.

He said pilots, not airline crews, would have to keep and maintain weapons and transport them in lockboxes. Each cockpit would be equipped with special sleeves to hold the weapons.

Boxer said she knew people were surprised at her support for the bill, since she was an advocate of gun control.

"This isn't about guns in the hands of criminals. This is about a trained pilot, who volunteers, most of whom have training in the military," Boxer said.

Al Aitken of the Allied Pilots Association, which represents pilots at American Airlines, said supporters were grateful to lawmakers and said the large margin of victory in both houses reflected the sentiments of thousands of airline pilots who believe in lethal force as a last line of defense.

"From the legislative standpoint it is pretty compelling and makes it a lot easier to get a meaningful bill passed through the conference committee," Aitken said. "We will be continuing to ask the president to support this and sign it into law when it gets to his desk."

"How do you look back now at 9-11 and not wish those pilots had had a firearm in that cockpit to give them one last chance to defend the cockpit?" NRA executive director Wayne LaPierre told CBS News Correspondent Dan Raviv.

"The military is under orders to shoot them down if they can't defend the cockpit," he added. "We ought to give them a firearm in the cockpit as a last resort if a hijacker is breaking through the door."