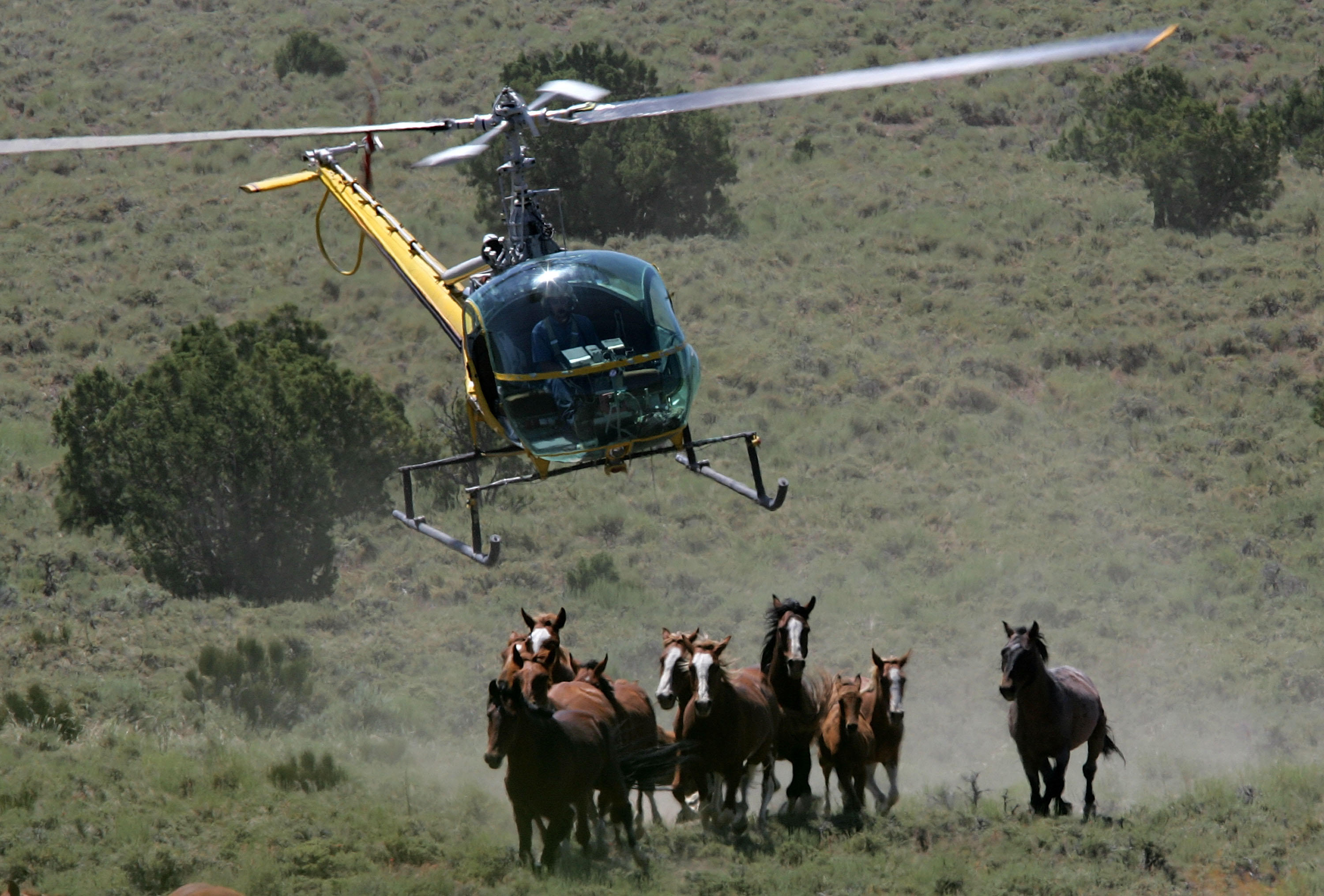 SAN FRANCISCO -- The fate of thousands of wild horses hangs in the balance as the Senate considers an amendment to a spending bill that would allow euthanasia of mustangs and burros roaming free on land owned by the federal government.

The amendment would allow the Interior Department's Bureau of Land Management (BLM) to sell excess wild horses without an assurance they wouldn't be slaughtered. The matter will eventually be settled in negotiations between the Senate and the House.

CBS San Francisco traveled to the Utah desert, 50 miles northwest of Cedar City, to witness a federally mandated round-up of an icon of the American West.

Using a helicopter that looks like it was stolen from the set of M*A*S*H, federal agents began the process of gathering 50 wild horses.

"When you have horses that close, when they come into a trap site, they're very fresh, they have a lot of energy. When you're gathering wild horses, they are wild animals," said Gus Ward, the BLM's Wild Horse and Burro lead for Utah.

The roundup is the result of a lawsuit settled by the state of Utah over horses encroaching on ranch land. With repeated helicopter passes, stallions, mares and foals are driven out of hills and corralled into a trap to be sorted.

From there, they'll be taken to a holding facility and hopefully adopted.

The BLM is responsible for the wild horses. The agency says there should be about 200 horses on this stretch of land. But there are closer to 700. The BLM warns the horses are at risk for starvation in higher numbers.

Matthew Wood owns the ranch where the roundup happened.

"I enjoy seeing a horse or two now and then, but it falls into the same category as seeing a nice big bull elk or nice big mule deer or a bear or something like that. But when it gets to be so many of them that they're destroying their own habitat, they're not pretty anymore," said Wood.

The roundup can be hard to watch, as the terrified wild horses are driven out of the mountains by sounds emitted from a helicopter, forced up hillsides and down gullies and ultimately drawn into the corral by a so-called "Judas horse" that leads the way.

"I'll be quite frank with you, some might put their head down and try to go through the panels. I hope that doesn't happen," Ward said.

Injuries aren't uncommon. These roundups, though, might get tougher to stomach in the coming years.

President Trump's proposed budget would allow "humane euthanasia" of excess horses and burros. It would allow unrestricted sale of certain animals that could end up sold to foreign slaughterhouses.

It all comes down to money. The new budget for the Department of Interior allocates $24 million more on gas, oil and coal management and $10 million less to manage the wild horse and burro program.

That means less money for roundups and holding facilities that house the horses until they can be adopted.

"When we have to remove horses, our facilities are full," said Lisa Reed with the BLM in Utah.

Out on the roundup, the proposed budget change has sparked testy exchanges.

"These horses that came off the range today, they didn't only lose their family and their freedom, but they might be slaughtered in the future. There's no telling the fate of these horses that we see rounded up today," said Simone Netherlands with the American Wild Horse Campaign, one of dozens of groups fighting to stop BLM roundups altogether.

Netherlands says the BLM's recommended number of wild horses on federal lands -- 27,000 on 22 million acres -- is absurdly low, and reports of starving horses are "fake news," spread to convince the public that euthanasia is necessary.

BLM employees on the front lines are hoping for the best to happen in Washington, but bracing for the worst. We asked Reed if she worries about the horses ending up in slaughterhouses.

"I worry about that every year. That is the last thing we would like to see happen," she said.