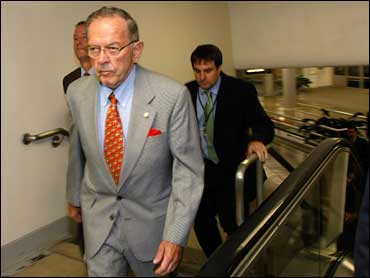 The FBI, working with an Alaska oil contractor, secretly taped telephone calls with Sen. Ted Stevens as part of a public corruption sting, according to people close to the investigation.

The secret recordings suggest the Justice Department was eyeing Stevens long before June, when the Republican senator first publicly acknowledged he was under scrutiny. At that time, it appeared Stevens was a new focus in a case that had already ensnared several state lawmakers.

The recorded calls between Stevens and businessman Bill Allen were confirmed by two people close to the case who spoke on condition of anonymity because the investigation is still under way. They declined to say how many calls were recorded or what was said.

Allen, a wealthy businessman and Stevens' political patron, agreed to the taping last year after authorities confronted him with evidence he had bribed Alaska lawmakers. He pleaded guilty to bribery and is a key witness against Alaska legislators. He also has told prosecutors he paid his employees to renovate the senator's house.

In July, FBI agents raided that house in the Anchorage suburb of Girdwood. Stevens has denied any wrongdoing and said he paid every bill he received for the project. Spokesman Aaron Saunders declined to comment Thursday. Stevens has said he won't discuss the investigation for fear it will look like he's trying to influence it.

FBI spokesman Richard Kolko said the agency would not discuss any aspect of the ongoing investigation.

Allen testified in federal court last week that he called several people at the FBI's behest.

"It's been a lot of work," Allen said of his efforts for the FBI.

A judge had previously ruled that Allen could not discuss politicians currently under investigation.

Allen is the founder of VECO Corp., an oil services firm that made nearly $1 billion in annual revenue. The company was a powerful lobbying force and its employees donated heavily to federal and state campaigns.

One example of Allen's calls surfaced last week in the trial of former Alaska House Speaker Peter Kott. While working with the FBI, Allen called Kott and asked how Kott's son resolved his financial problems. Kott replied: "It was your check."

Kott, like Stevens, is Allen's longtime friend. Kott's corruption trial is under way in Anchorage.

Beyond the calls Allen made while cooperating, prosecutors also have thousands of conversations the FBI recorded while secretly wiretapping phones belonging to Allen and fellow VECO executive Rick Smith. Agents also secretly videotaped meetings between contractors and state politicians at a hotel suite in Juneau, Alaska's capital.

In addition to work on Stevens' house, a former employee also said VECO workers also helped run the senator's fundraisers while on company time, a practice that appears to violate campaign finance laws.